You are here: Home / Buzz / Things I Learned from – a Moroccan Camel Driver 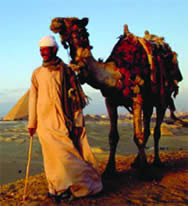 This week’s Things I Learned from is from a HIGHLY unusual source – Betty from Betty in the Sky.com. I think that you’ll really enjoy it.

Things I Learned From a Moroccan Camel Driver

I was on a three-day camel trek in the Sahara desert in Morocco. My camel driver was a handsome young 22 year old boy named Hamid. He guided the camel as I rode on top. He spoke some English and I was amazed at how much I took away from our conversation.

I am a flight attendant, and here in the United States this is not considered to be a high-paying job. I was traveling with a friend and she was on another camel. Hamid, who had never been out of the Sahara desert, was curious about what the rest of the world was like, and he asked me simple questions such as, “So you have a car?” and I answered “Yes, I have a car.” Then he pointed to my friend and asked, “And she has a car?” “Yes, she has a car too,” I replied. Then he paused and said, “Why don’t you give one away?”

I thought this would make perfect sense, but then he said incredulously, “You don’t live together?” and I said no, I live alone in an apartment and she lived alone in her house. This really blew his mind. In amazement he asked, “You live alone?” When I affirmed that we did, he told me that he never heard of anyone living alone! He said he lived in a house with 60 other people! I assumed it was a language problem and he meant 16 people, so I got down from the camel and he wrote the number 60 in the sand. Yes, it was true — he lived in a house with 60 people!

So what I learned from a young camel driver is that while I may not have a high-paying job, I am extremely wealthy. It’s a shame that I had to fly to another country to stop and realize how fortunate I am and how relative wealth is. I have a car and an apartment and a computer in that apartment…I am truly wealthy!

Betty is the author of the popular podcast “Betty in the Sky with a Suitcase”. She has been a career flight attendant for nearly a quarter of a century, and began podcasing in 2005 in order to share the wonderfully outrageous things that happen on airplanes with her listening audience. Her podcast, now with half a million fans, has now been turned in to a book by the same name. It’s full of amusing airline anecdotes guaranteed to amaze. Betty’s also wriiten a book called Betty In the Sky With a Suitcase: Hilarious Stories of Air Travel by the World’s Favorite Flight Attendant