The Love Boat made it’s way to Fort Lauderdale last week to name the newest gem of the Princess fleet…the Regal Princess. Luckily I was there to get the scoop on this lovely lady of the sea along with her godparents the cast of The Love Boat. I’ll be bringing you insider views from the cabins to the fabulous food, from what’s doing on deck to what to do when you get to Princess Cays soon, but right now I want you to come with me onboard for a ceremony that few get to witness (and yes, YOU get to see it all here).

This was my first foray into a “naming ceremony.” I remember seeing photos of queens and princesses hitting a bottle of champagne on the bow (what a waste of champagne), but had never experienced the excitement myself. I wanted to take you ALL along with me as I experience a true once in a lifetime event. From the preparations to the squeals of delight as this ship gets her official name, Champagne Living was there in order to share the festivities with you. It all began two days before the actual ceremony, when I arrived. Luckily, I happened to be on the Lido deck to catch all of the rehearsals (even the actual ship’s Christening, as they practiced letting go of the rope that swings the champagne bottle). As much as I loved the actual ceremony, it was nice to be among only a handful of people relaxing and watching the preparations. Both Charo and Jack Jones (who sings the theme to the TV show) were among those to perform, and we got a bit of a private concert in advance (and a lot of coochi-coochi from Charo as she shimmied around the deck with fans). While Tori Spelling was scheduled to be the MC, there was a change of plans, and thankfully Florence Henderson stepped in for Ms. Spelling (who wasn’t feeling well) and saved the day….just like on an episode of The Love Boat, The Brady Bunch or…. 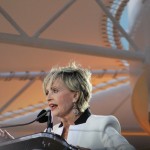 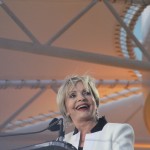 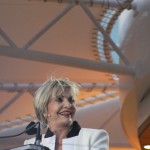 Of course with The Love Boat cast as Godparents, the ship was attired in the logo befitting of a Saturday night with our favorite cruise ship crew.

It ALL came together on the actual night of the naming when the rehearsed and staged performances took place. We gathered on deck early, to make certain that we were in the thick of things, all garbed out in our nautical attire. Yes, the preview performances were fun and intimate, but NOTHING could beat the excitement of Jack Jones singing the theme of The Love Boat for a crowd that were just chomping at the bit to relive a bit of their childhood. Followed by Charo playing Spanish guitar like no other. She’s not ALL just coochi-coochi you know. 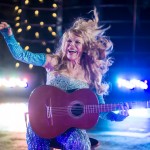 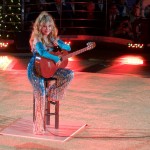 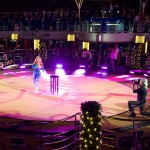 Photos of Charo above courtesy of Princess Cruises

It was time for the big event. The lever was pulled by the cast of the show and Captain of the Regal Princess, the 50 bottles of champagne (commemorating Princess’ 50th Anniversary) broke outside the ship, while ONE token bottle broke above the crowd. We were treated to fireworks, streamers and a champagne toast to this new beauty of the seas. Finally our new friends (we spent a good deal of time with these guys) Mo5aic performed a medley to close out the ceremony and begin her inaugural journey in the Caribbean. Join me next week as I take you inside the beautiful Regal Princess, introduce you to her amazing cuisine, and of course what it’s like inside of the Lotus Spa. Also coming up is an excursion to Princess Cays and Eleuthera!!

Join me soon as I take you inside the beautiful Regal Princess, introduce you to her amazing cuisine, and of course what it’s like inside of the Lotus Spa. Also coming up is an excursion to Princess Cays and Eleuthera!!