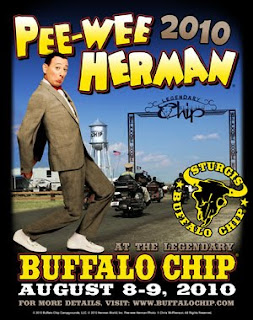 …and the word of the day is…

Buffalo Chip that is, as in the Sturgis Motorcycle Rally

One of my favorite “characters” of both television and movie “fame” Pee Wee Herman is going to be recreating his infamous Tequila Dance at the 2010 Buffalo Chip in Sturgis, SD, on August 8th and 9th.

Pee Wee will be hanging out with his fans, signing autographs and help raise money for various charities in South Dakota: The Black Hills Childrens Home Society, Kids & Chrome Foundation, and the Sturgis Motorcycle Museum and Hall of Fame. 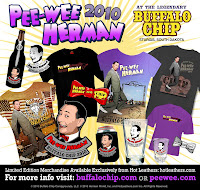 I won’t be there (it’s during BlogHer), but I can get a piece of the fun, as can you by going to Hot Leathers and picking up some LIMITED edition Pee Wee/Buffalo Chip souvenirs.

By the way – be sure to check out Pee Wee’s Broadway debut this year (limited run) if you’re in the NYC area.