You are here: Home / escape / Champagne Wishes and Caviar Dreams at the Historic InterContinental Mark Hopkins 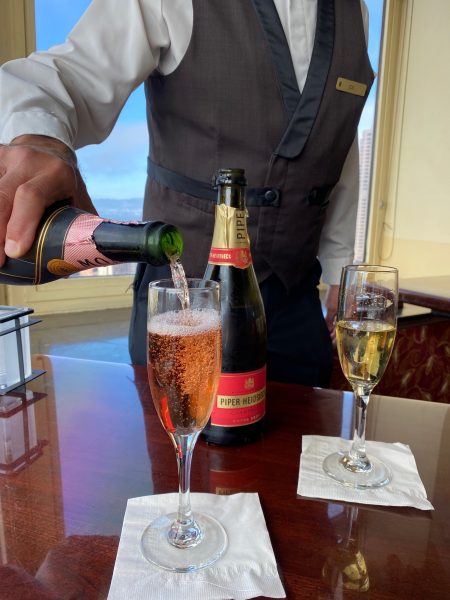 Literal champagne living with a night at the InterContinental Mark Hopkins is unsurpassed, especially while savoring champagne and caviar at San Francisco’s Top of the Mark.  What made it extra special was this: my husband Frank and I returned to the same hotel where we spent our wedding night in 1985. 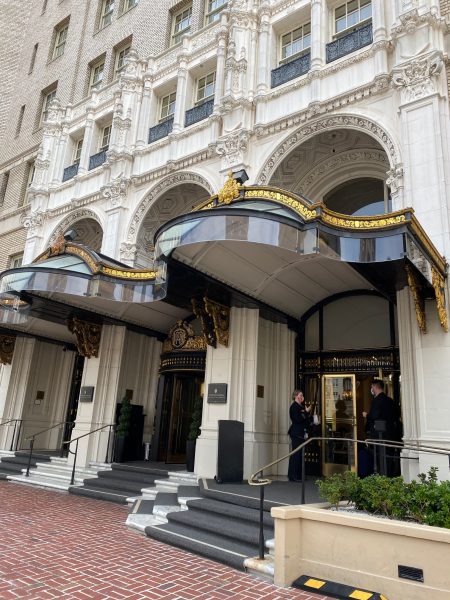 As an early 20th-century hotel, the Mark Hopkins is one of the city’s most historic and glamorous properties built after the 1906 earthquake.  The architecture blends French chateau and Spanish renaissance styles with the touch of Art Deco.  And now that the lounge is open again to the public, people are rushing to experience it again. 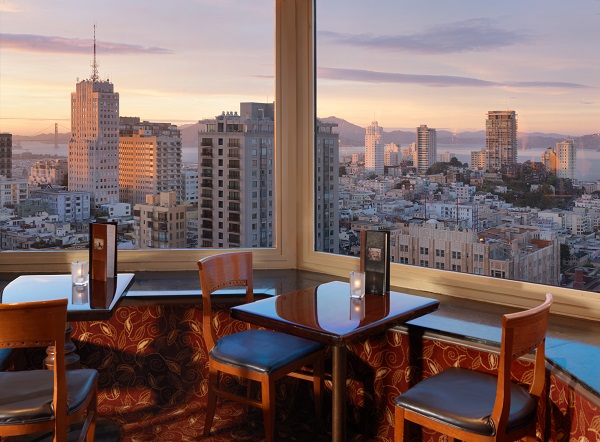 The famous Top of the Mark cocktail lounge was a smash from its inception in 1939.  Owners did not know if the lounge was going to be popular, but once it opened, people flocked to it and were waiting in the lobby of the hotel in order to take the elevator up.  Early visitors were treated to views that were nothing less than ethereal. Today, tourists still thrill to sightings of St. Mary’s Cathedral, the Golden Gate Bridge, the Trans America Pyramid, the Bay Bridge, and Coit Tower in the distance.

The wait staff, dressed in black uniforms, are proud to be back at work. The most fabulous way to experience the Top of the Mark is to sit by the windows and converse with neighboring guests. Right behind us was a family visiting from London.  Another group turned out to be a set of business colleagues toasting one another after work.

The celestial Top of the Mark features a raised center stage for music and entertainment.  It is definitely a San Francisco treat to come here and watch the lights illuminate the city at night, and if you are here in the summer, know that you should make reservations in advance. Also, know that the fog can roll in at any moment and turn your world upside down when you see nothing but white. 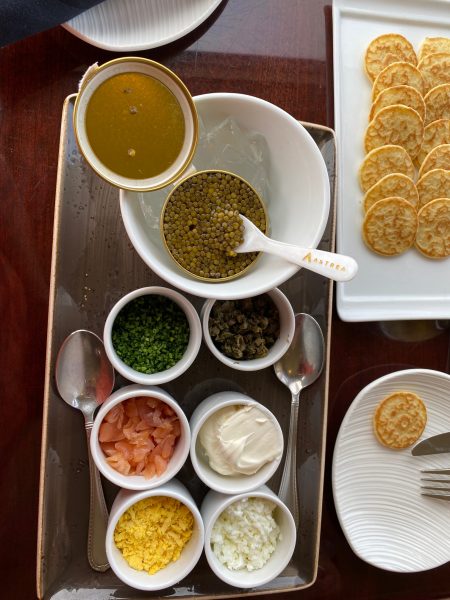 The $195 Astrea Caviar experience had my heart dancing.  Thanking God for our 37 years together, we clinked glasses in front of the window view of the TransAmerica pyramid, and I sipped on Moet rose champagne while Frank imbibed Piper-Heidsieck bubbly.

The selected caviar was the Oscietra brand, delicately assembled in a small metal tin can. Open-faced in its case, the tiny California sturgeon eggs were languishing in their tin, atop a bed of ice. I never knew that champagne and caviar is “a thing” that was once reserved for the rich and famous.  But anyone can enjoy this pairing, and I learned that special Mother of Pearl caviar spoons are used for such an extravagant experience.  Metal spoons are a no-no as they will wreck the taste. You can also order the $175 Kaluga Hybrid caviar, which contains eggs from two types of sturgeon and is revered for its bronze and golden brown hues, and its nutty and creamy flavor. 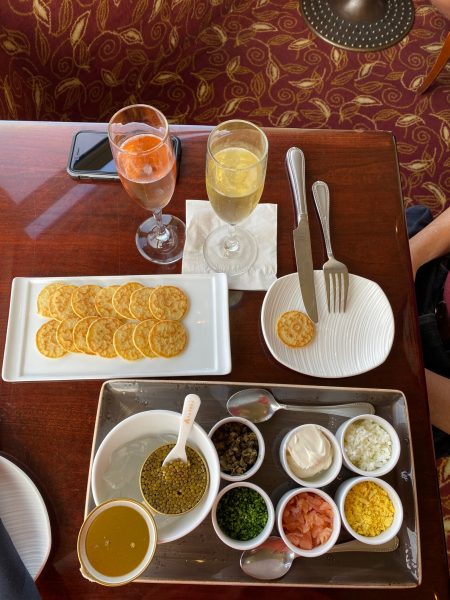 The Mark Hopkins caviar indulgence is something to savor at least once in your lifetime. The waiter pours your champagne and then brings out a plate that holds the following:  a series of buckwheat blini or coin-sized pancakes, a condiment cup for the cooked egg yolks, another for chopped egg white, one for chopped bitty onion bits, then capers, and creme fraiche, and then another little cup for chives.  Not to be missed was the smoked salmon that also came with the celebrated platter.  To eat, you scoop up the condiments on your blini, then top it with caviar slowly.  Then you bite and let the salty flavors explode in your mouth. I wanted to scream, “This is SO GOOD!” but I held back. 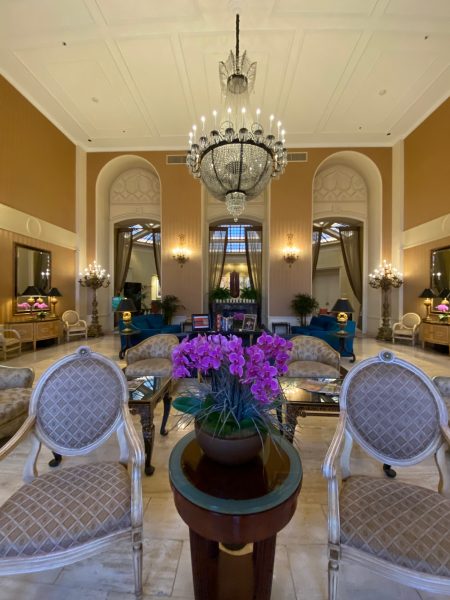 When you arrive, take a moment to appreciate the Top of the Mark’s old-world charm. The furnishings are handsome, and the raised up center of the staging area is perfect for musical entertainment or special announcements.

It was very popular among the military set.  In fact, the one corner of the lounge is the Weepers’ Corner because it has a view of the bay, and during WWII, wife and girlfriends would weep in that spot as they saw their men’s ships going out to sea. There is a military tradition called the Squadron Shot where vets or active military get a free shot of bourbon upon proof of service. The story goes way back when a serviceman purchased a bottle of bourbon and left it with the bartender to share with future military personnel. The tradition was discontinued but started up again. So now, take your favorite vet or active service buddy, and get him or her a Squadron Shot! 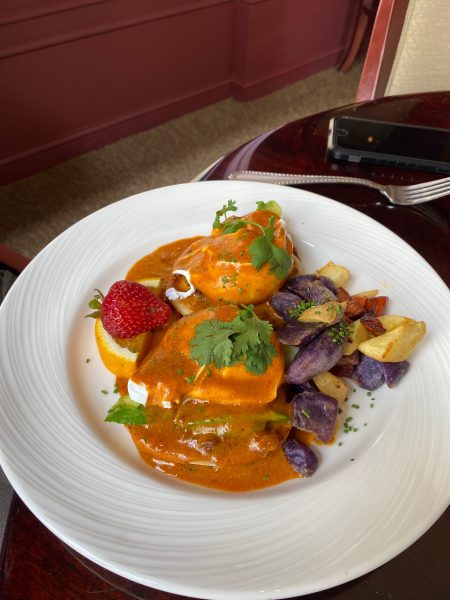 Downstairs, the Nob Hill Club was ideal for breakfast.  The dining room is also rich in old-world décor, and the service is friendly, but not intrusive.  Our fresh juice and coffee, together with aromatic apple spiced waffles and just-spicy-enough chorizo eggs benedict was perfectly on point.

The richness of the hotel’s history is steeped in the walls, the furnishings, and décor, and in memorial plaques, and mini-museums.  The hotel, built in 1925, is still the same as when it was erected. Now under the umbrella of the InterContinental Hotel Group, this icon crowns Nob Hill with 19 floors of story upon story of celebrities, royals, and heads of state.  The palatial ballroom, Room of the Dons, features nine murals depicting the history of California painted by Maynard Dixon and Frank Van Sloun in 1926.  Did you know that California was named after the fictitious Queen Califia in literature? 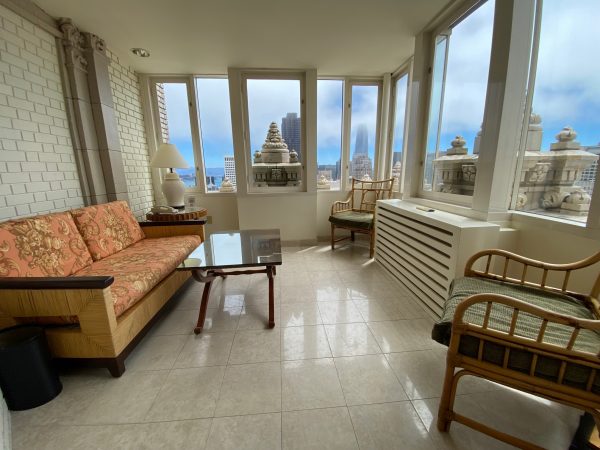 Meanwhile, staying here is particularly special when you want to block out the headlines of the day.  In Suite 1505, we enjoyed reading in our separate sun room filled with a small rattan couch, coffee table, and rattan chairs. We looked out to the Salesforce Tower, now SF’s tallest building, and saw more intricate details of the sculpted finials of the exterior of the hotel, cement in nature, and molded like small flowers and flower buds. Crowning touches like this certainly added to our transport back in the early 1900s when automobile travel was now replacing the horse and buggy. 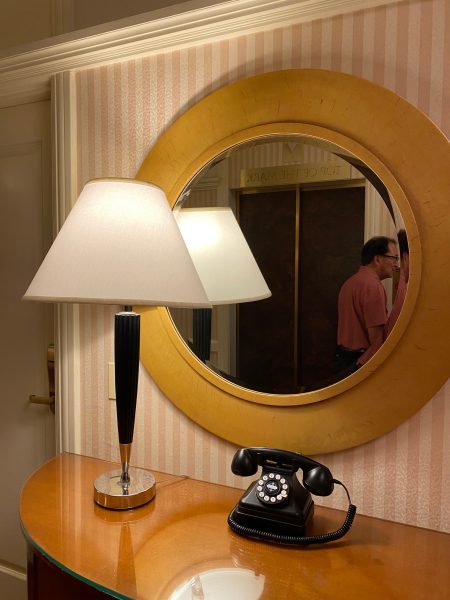 Know that a stay at the Mark Hopkins is a welcome departure from the ubiquitous modern hotels popping up everywhere with gray everything. At the Mark Hopkins, you feel you are in the lap of history.  The stately standing lamps and warm woods in the suite sat atop mustard and black grid patterned carpet. Orange drapes added to the drama. The sitting room outside our bedroom featured a painting of an antique motorcar against soft yellow patterned wallpaper. The bedroom with bluish wallpaper completed the color scheme well.  And remember, most hotels today don’t even bother with wallpaper anymore. 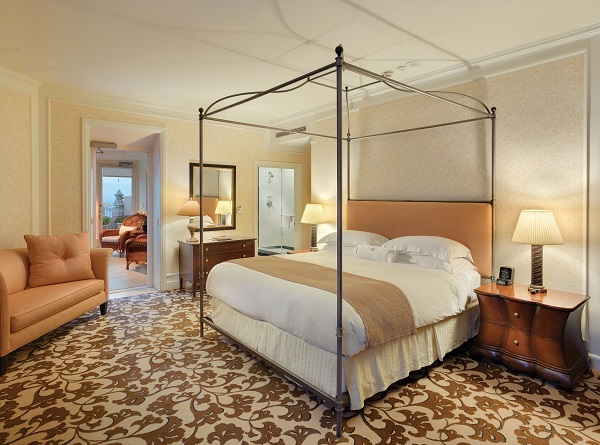 The marble bathroom floors, curvaceous rosewood vanity, marble bath soaking tub, and shower brings to mind what the railroad barons and their wives must have done to indulge themselves during vacations to San Francisco. 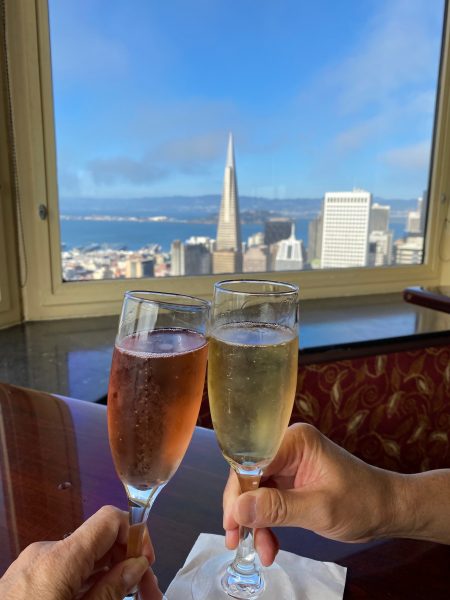 When you want to brush shoulders with history, escape to the city and escape to the era before cell phones and computers, or celebrate your 37th anniversary, perhaps you can refresh and start anew. 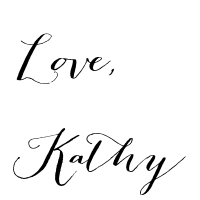 « The Artful Lodger is Alive and Well at Hotel Nia in Menlo Park, Calif.
Making Waves at Fort Lauderdale’s B Ocean Resort »