You are here: Home / escape / Celebrating the holidays in Rome 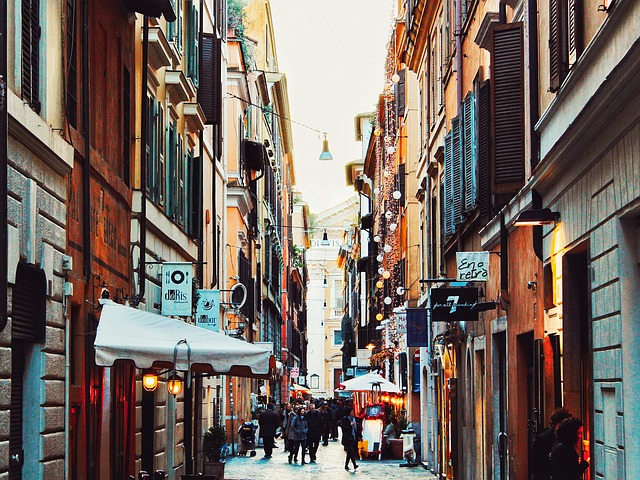 Here are some ideas for celebrating Christmas and New Year’s in Rome.

On December 8th, the first Christmas celebrations are held on the Feast of the Immaculate Conception. Churches throughout Rome (throughout all of Italy, in fact) unveil their nativity scenes, called presepi. Go to the Piazza del Popolo in Rome to see hundreds of these presepi. You can view a life-sized one at St. Peter’s Square.

You can’t celebrate Christmas in Rome without partaking of the incredible cuisine. Natives of Italy actually fast (abstain from food) during Christmas Eve day. That’s because the evening brings an amazing meal! The Christmas Eve meal features fish, since Catholics do not eat meat on the night before a major holiday. But fish is served in multiple ways, and the meal often features at least seven different kinds of fish and seafood dishes. Enjoy linguine and clams, shrimp, cod, and eel at this opulent Christmas Eve meal.

Meals celebrating New Year feature pork instead. Sausages and roast pork are traditionally served, along with lentils. The rich meat and coin-shaped lentils symbolize the richness of the upcoming year.

Whether it’s Christmas or New Year’s feasting, restaurants in Rome pull out all the stops to serve amazing cuisine. Make sure to partake of at least one of these special meals during your visit.

New Year’s Eve is an excellent time for viewing fireworks in Rome. Along with the fireworks, there are often special bands and shows. If you stay up until midnight, you will see the displays at their peak. Wear red! It’s a sign of good luck for the upcoming year.

Called La Festa di Santo Stefano, this holiday on December 26th is very important in Italy. It marks the day the wise men came to visit baby Jesus. Be prepared for many restaurants and other public places to be closed, but in Rome there are still some museums that are open. So as you plan your holiday in Rome, plan for December 26 to be a fairly quiet day. It can actually be a nice relief from all the crowds and festivities if you plan on it.

The Feast of the Epiphany

This is the final holiday of the Christmas season, and it’s the gift-giving day – January 6th. This is traditionally a day spent with family, as most businesses are closed. The night before, children set out shoes or stockings to be filled with gifts.

There are many other places to visit and things to see in Rome. Be sure to take in all the sights and scents of Rome during your holiday visit.

The Compass Girls with Catalyst Collections – 7/28