You are here: Home / escape / Arrrggghhh…5 Pirate Landmarks you can visit! 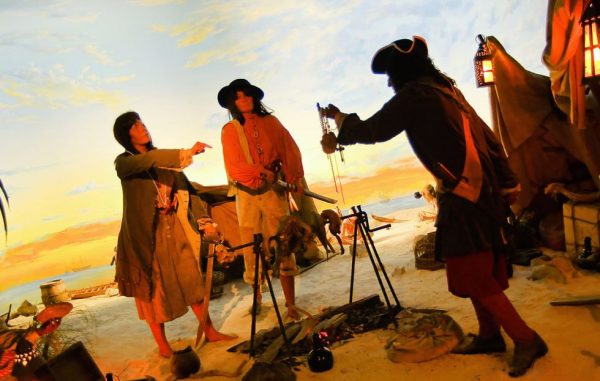 Photo courtesy of: Pirates of Nassau

Most pirates didn’t actually bury their treasure, as they wanted to spend their loot immediately. There is one exception, William Kidd. The loot he buried back in the day was uncovered in Gardiner’s Island, New York. While the loot was brought to Boston, MA, and said to be worth well over $1 million US dollars, you can visit the stone plaque in New York where the loot was found.

The pirate known as Blackbeard settled down in Bath, North Carolina in 1718 to retire. He was invited to many fancy dinner parties back in the day. His birth name was either Edward Teach or Edward Thatch and you can visit his statue as well as the North Carolina Maritime Museum where they have a large exhibit of Blackbeard’s artifacts.

This is a fun location in Nassau, Bahamas where you can hop aboard a pirate ship to experience a middle of the night pirate adventure. While this may be a recreation, there’s some truth behind this pirate adventure. Between the years 1690 to 1720 Nassau found itself with a high pirate population. You can find exhibits here and explanations as to why the pirate population eventually faded away.

This island near Madagascar houses a pirate cemetery. Back in the 17th and 18th Centuries, this island was known to house more than 1,000 pirates. The island was a perfect geographical location and offered fresh fruit for the pirates to survive while they set up trading ports to make money. Today, you can visit the cemetery where you’ll see tombstones of the many pirates laid to rest on this island.

This location in Hampton, Virginia once displayed the head of Blackbeard. It is said that the elite Virginias residents weren’t happy when the North Carolina governor pardoned Blackbeard. A crew was sent to engage Blackbeard’s crew in a pirate battle and ultimately ended in the death of Blackbeard. His head was displayed for 7 years at this location and now you can visit the landmark.

Yo, ho. ho….bring on the rum! There you have it 5 pirate landmarks that you can visit. It’s so fun to visit new locations and see unique sights like this. I hope that you’ll take some time to visit at least one of the recommended pirate landmarks on my list here today

« Did you know? Buena Park is the Halloween Capital of Southern California?
October’s On the bookshelf with Ava »