I am a confirmed Francophile. Having lived in the suburbs of Paris in my twenties, followed by my “whenever I can afford to go” pilgrimages that I make, I have come to love not only the country, but it’s culture as well. I belong to a wonderful group of women online who embrace the French lifestyle. 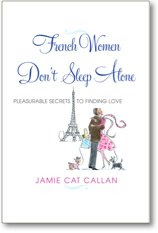 I knew that I’d have to tell you about it.

does for LOVE, what Mirielle Gulliano’s book, French Women Don’t Get Fat

did for diet. I mean WHO would know more about LOVE than the French? Mind you, this is not a book that’s just for the SINGLE woman, married women will learn from it as well. Jamie Cat Callan author of this book tackles such subjects as:

just in time for Valentine’s Day, then pay La Belette Rouge a visit. While you’re there look around and read some of her posts, she’s an extremely talented writer.