You are here: Home / escape / Where to go in Mexico to Celebrate Day of the Dead 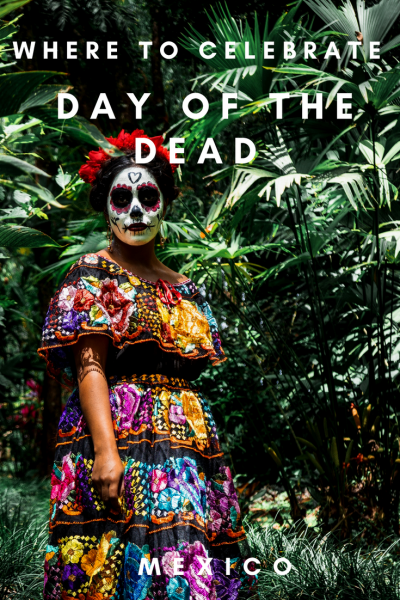 Celebrated in Mexico between October 31st and November 2nd, Day of the Dead (Día de Muertos in Spanish), is a celebration that commemorates the lives lived by those who have passed away.

Shockingly to some, Day of the Dead isn’t meant to be a gloomy affair. Instead, Mexicans head over to cemeteries and decorate the graves of their deceased relatives and friends with colorful flowers, candies, and things the person once cherished. It is believed that spirits come out of their graves to celebrate alongside their loved ones, so, in some cities, traditional dances and music and performed, filling the ambiance with joy for the spirits who come to pay a quick visit to our world.

If you’re dying to witness Day of the Dead but are unsure where to go exactly, we’ve put together a list of the best places to celebrate Day of the Dead!

As far as locations go, there’s no better place to witness an authentic Mexican Day of the Dead than in Janitzio, a tiny island floating over Lake Patzcuaro in the state of Michoacan.

Beginning on October 31st, the Day of the Dead celebrations in Janitzio remain as traditional as ever. Festivities start with long-winded boat trips to spear-shoot ducks, which are later cooked and offered in altars to commemorate the lives of the deceased.

The following morning, the women and children of the village head over to the graveyard to decorate the graves of their passed loved ones with flowers, candies, and food. A great effort is made in ornating the graves as, later on in the day, a contest is organized to choose the best altars in town.

The afternoon is followed by lively performances, traditional dances, and music filling the air to remind both visitors and inhabitants that Day of the Dead is meant to celebrate life rather than to mourn death.

At night, fishermen light up the lake with thousands of candles and perform a unique dance over the waters of Lake Patzcuaro. Dubbed the “butterfly net dance”, hundreds of fisherman gather in their wooden and canoes and spread their nets until they look like wings, flapping them up and down to guide the souls of those who have passed back into the cemetery.

Mexico City’s most iconic avenue, Reforma, burst into colors on Day of the Dead when hundreds of giant skeletons, acrobats, and other quirky characters march and perform their way through the Mexican capital as thousands of people gather around to witness the commotion.

Up until 2016, Mexico City’s Day of the Dead celebrations remained private family affairs. When James Bond’s Spectre opening scene put a spotlight on the date, a parade was organized as an ode to the one portrayed in the film, where Bond chases a criminal through crowds of people dressed up in skeletons and catrina costumes around Mexico’s alluring historical center.

That said, and despite not really being a “traditional” parade, it does a great job at showcasing the rich culture Mexico has to offer. As a myriad of catrinas enter the streets dancing wistfully accompanied by giant skeletons –  just as the one portrayed in the famous scene – there also other characters from Mexican folklore added into the mix.

During the Day of the Dead festivities, this already vibrant beach town becomes even brighter as the streets get ornamented with colorful flowers, life-size catrinas, and bright crepe papers hanging from one rooftop to another.

As the night creeps in, both locals and visitors alike are invited on a traditional night walk from the town’s central plaza to the cemetery to continue the celebrations.

Oaxaca is certainly the king of Day of the Dead destinations.

Considered the artistic and folklore capital of Mexico, it’s no surprise that Oaxacans take up the opportunity to host a myriad of parades to honor the date. Aside from the endless amount of colorful altars that you’ll stumble across in every corner of the city, you’ll also get to take part in parades organized by locals, in which they’ll dress up in traditional clothes and walk around the city performing dances while filling up the city with joy.