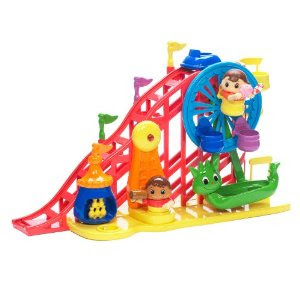 At least that’s how it felt when my grand-nephew Evan got a hold of this FUN and interactive toy for little ones. It’s almost like when YOU get off of the roller coaster and immediately get back in line to do it again.

I sent this to my niece and grand-nephew to review and she called me to tell me that he was squealing with delight as he placed his favorite characters on the Spin Master Pop On Pals Amusement Park Play Set.

Now, understand that Evan is a bit younger than the ages this toy is recommended for (18 months – 4 years), so he had a little trouble at first. My niece helped him out and showed him how it was done and within minutes he had the little Pop on Pals in hand and was (with a little help) placing his favorite characters on the rollercoaster, playing the milk toss game, ferris wheel and  more. The character pieces are nice and big, and it was easy for this 16 month old to pick them up and place them in the various positions. He did seem to need a little help getting the rings on (but, as I said – he’s younger than the recommended age group). 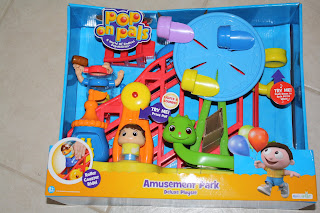 He got so excited by the sights and sounds that he could create, as well as the motion of the ferris wheel and roller coaster that it was difficult getting him to do something else.

The character pieces are nice and large, so there’s NO CHANCE of choking (even if a little one got a hold of it). The little people are sort of gender neutral (which I like, but my niece and grand-nephew really didn’t even care about). The set really promotes manual dexterity, so

is available at Amazon.com, Toys ‘r Us,  or just about anywhere that Spin Master toys are sold for under $35.00. Be advised that this toy takes 3 AA batteries and – they’re INCLUDED!!!

This toy gets a HUGE thumbs up from Evan, Auntie Zippy and my niece Cayce. This is one toy set that will be used for a VERY long time.

Check out the Pop On Pals Website for some FUN interactive play. Your kids can COLOR online with virtual crayons and you can download a checklist of little characters.

Thank you to Team Mom and Spin Master for providing product for this toy review. I was in no way compensated and all opinions are strictly my own.