You are here: Home / Buzz / Undoing the money maze – or I’m bored 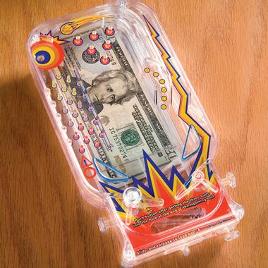 October is here and the first of the holidays are barely a month away. I’ve got Thanksgiving under control (thanks to the folks at Butterball U), and I’m actually beginning to think ahead to the December holidays. You know which ones I mean. I mean the ones that include the other HOLY days like “Black Friday” and “Cyber Monday.”

Whether it’s Christmas, Chanukah or Kwanzaa that you celebrate, I’m pretty certain that you’ll be getting a backache as you try to lift the Sunday edition of the newspaper week after week from Thanksgiving until they got you to upgrade that return.

I know that many of you actually pre-plan and have been shopping year round for this event. While that’s smart of you, I have to say that watching the fights in line over the last cabbage-patch-nintendo-xbox-

smart-toy-that-gets-ignored-the-next-day-after-you’ve-spent-8-hours-in-line-while-sitting-next-to-a-street-person-in-your-folding-chair-gift is a moment NOT to be missed. OK, maybe that’s NOT the Champagne Living “style,” but a diva’s got to get down with the people every now and again.

Then again, I can give James and the Rolls the day off and do a little catalog shopping straight from the pages of the Sky Mall.

This year I’ve actually found the perfect gift for “B”. At 27 years old, he always needs money, but what fun is it to just stick a $1,000 in an envelope and send it off (“B”, if you’re reading this….take off a zero, that was for affect). Page 99 of the American Airlines Sky Mall catalog offers the Bliz Pinball and Money Maze games that are sure to amuse and entertain. I mean, who doesn’t want to struggle trying to win the game in order to get to their gift? That’s right, the premise of this “toy” is that you tuck money or a gift card into the game and the recipient must actually complete the game and WIN in order to claim the “prize.” I have visions of having spent the last 15 or 20 years attempting to get Mario and Luigi from point A to point B. Imagine the frustration of not getting past the first level, and knowing that the money that’s tucked neatly inside may NEVER be yours? 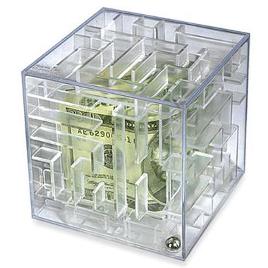 “Way more entertaining than simply putting a $50 bill inside a greeting card! The Money Maze and Gift Card Game each require the recipient to guide a little ball through a multi-level maze to finally access the reward. With the Bilz Pinball game, player uses the flipers to shoot 3 pinballs into slots that pop openthe gift drawer. Instructions included.”

From the photograph the pinball game looks to be one of those cheap plastic ones that you get as a party favor at a 5 year olds birthday party. You know, the ones that frustrate them (and you) to the point of tears in the back seat of the car after they’ve had so much sugar and Coca-Cola at the party? Personally, I was NEVER able to get that little silver ball through the maze and into the tiny hole in the cardboard.

While I sit and contemplate whether I want to include a gift guide here on Champagne Living this holiday season, I’m left with the feeling that there are a WHOLE lot of gifts much like this that may never make their way to a blogger’s gift guide. I’m thinking that maybe this year, I’ll have to include it….packaged with a hammer to smash it open to get to the $$$$ of course.

« Volvo Fashion Week – Moscow
Otterbox – what do Otters have to do with Breast Cancer? »