You are here: Home / Buzz / Today is Tax Day – Tomorrow is Census Day 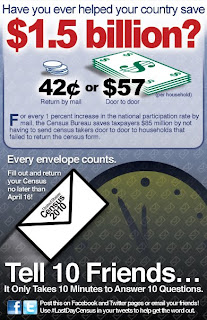 With all of this last-minute rushing to complete your tax return, DON’T FORGET that tomorrow is ANOTHER important day.

It’s US Census Day – those forms that you received in the mail last month need to be returned tomorrow – Friday, April 16th. By returning your form by mail you can help reduce the cost of taking the census by $1.5 billion (that’s what the government will save if EVERYONE mails their form back). It costs the government just 42 cents for a postage paid envelope when a household mails back the form but costs on average about $57 per household to send a census taker. So, instead of complaining about how much the government spends on things like this,  take matters into your own hands and help reduce the cost by mailing back those 5 easy questions.

If you’re wondering why taking the Census is so important – here is some information that Global Influence along with the US Census Bureau had to share:

Children who are hidden from the U.S. Census counts (taken only once every 10 years) are not a laughing matter. Many parents may not realize the importance of accurately reporting the number of children in their family, including newborns. The truth is that the undercount of children means that we do not get a true picture of our nation and our communities do not get their rightful share of public funds.

Why Children Count Too

Children have been undercounted in every census since the first one in 1790. Local communities rely on census information in planning for schools, child care, health and other critical services. Babies need to be counted today, so they can benefit tomorrow from community services.


Census counts are used, in whole or in part, for more than 140 programs that distribute more than $400 billion of federal funds to states and localities, including such child-focused programs as:

Unlike adults, who may bear some responsibility for making sure they are counted in the Census, children are dependent on others to make sure they are included. Yet in 1980, 1990, and 2000, Census Bureau data show children, particularly young children, are one of the groups most likely to be missed in the Census. In fact, in the 2000 Census, there was a net undercount of more than 1 million children under age 10.

Remember –  The Census only comes around every ten years. So when you receive your Census form in mid-March, make sure your child (no matter how old) is counted!

So, please just take a minute and put that form into the mailbox along with your taxes today (or tomorrow the latest). It’s important.