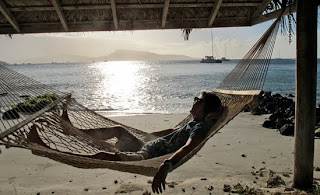 I’ve been going absolutely CRAZY on Monday nights – missing my favorite show (although I am ready “Medium Raw” soon to be released). My MAN is back – Anthony Bourdain is hitting the Travel Channel with an all new season of No Reservations.

To start things off on a FUN note, Tony will be Island Hopping in the Caribbean and I’m ready for some great fish and Caribbean flavored  meals, as well as Tony’s quick commentary, and the usual bruhaha that I expect from my favorite chef turned traveler.

A visit to Petit Saint Vincent in the Grenadines, where there is no airport, no TV, and no Internet, just a. little yellow flag which you raise whenever you are feeling famished is first stop on the tan your way to an Emmy show. Who can resist fresh lobster and fruit on the beach? I’m sure that Tony & Co will find NO fault with those eats (especially since Tony’s background includes having started in Provincetown, MA – where lobster is a staple).
Tony’s friend, Norman Van Aken, joins the No Reservations crew in Petit Saint Vincent, after leaving Key West.. Tony cashes in on the opportunity to take a few jabs at the chef and restauranteur known for accidentally/purposefully coining the term, fusion. “All of the crimes committed in the name of fusion,” Tony says, “are directly attributed to this man.” You’ve got to be pretty tough skinned to be a friend of his.

To tell you the truth, I don’t CARE WHERE he’s going – I just missed him and I’m excited that  No Reservations will  be hitting a monumental anniversary  when the 100th episode of No Reservations airs on September 6th. Guess where he’s going for #100? Yes, my favorite city, the place I consider to be my second home and where the very first No Reservations was taped—Paris.

If you call my house on Monday at 10 E/P you’ll get a busy signal….because I’ll be sitting in front of the TV, phone off the hook, with the Travel Channel and my MAJOR crush – Anthony Bourdain.