You are here: Home / escape / No Reservations – The Hudson Valley 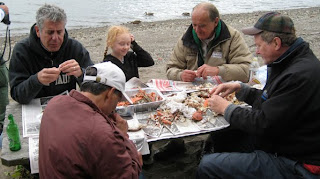 When you mention the Hudson Valley to me, the first thing that I think about it ART. Home to the famous Hudson River School of Artists this area just over the river from the city.

Of course, Tony will take a DIFFERENT approach to the area (are you SHOCKED???).

I understand that the episode begins with Tony sailing, and I’m praying that doesn’t mean that he’ll be the one controlling the tiller. Thankfully, he’ll be coming into contact (no, not CRASHING into) a floating hot dog stand. ONLY TONY could find a place to eat ON THE RIVER.

Then it’s on to a nuclear plant (I have visions of the Simpson’s here and that’s NOT good). Food harvested nearby a nuclear plant? This isn’t Andrew Zimmern’s new show is it? Apparantly, there are some local blue crabs found in the river banks. Hmmm….I wonder WHY it has an extra claw? Personally in an area like that, I’d be more likely to go to McDonald’s, where at least I KNOW that the food isn’t fresh off of the docks.

Then it’s on to Pine Island in the black dirt region of the Hudson Valley. Tony joins the Matuszewski family in their sausage shop, which has been family-owned since it was started in 1947. To say that the chef is a character, would be a good description and it looks as though some of the people hanging around the place are a little…um, DIFFERENT (yeah, that’s it…DIFFERENT). Still, good food is good food, no matter WHO’S doing the cooking.

Next stop, Hyde Park, home of the FAMOUS CIA (Culinary Institute of America), which is one of the premiere cooking schools (although being a Rhode Islander, I’m partial to Johnson & Wales). Tony meets up with his old friend Michael Rulman, where they visit the CIA (Tony’s Alma mater). Equipped with a chef’s coat and hat, Tony and Michael are assigned a stir-fried squid with basil dish, to be made for loads of hungry students. “Not to brag, but I could handle this assignment while getting a colonoscopy and still make it in time”. Hmm…not a pretty picture Tony, but I get your point.

I can’t wait to see the part where Tony visits the Mohonk Mountain House  in New Paltz. It’s a 265-room Victorian castle built in 1869; also one of America’s oldest family-owned resorts. Stephen King has been a guest in this place, which totally makes sense given its creepy nature. When you see this place you’ll KNOW why he set “The Shining” in a similar hotel.

On to the home of chef Michael Pardus for some Asian food. Sierra Pardus (Michael’s 10-year old daughter) gives Tony a run for his money when it comes to criticism. Tony says, “I’ve never encountered such an incise critic of my life’s work!”. That girl has some guts!

Not to spoil anything for you, but one of my FAVORITE comedic actors is going to have dinner with Tony. I just watched Zombieland the other night, and his role was my FAVE. THAT’S right, Tony’s going to spend some time at X20 with BILL MURRAY (Peter Kelly’s restaurant) located on a pier on The Hudson River.

As always, you can check Tony’s travel guide for the area on our website. Be sure to tune-in Monday, at 10 E/P for this all-new episode!