You are here: Home / Buzz / Music to my ears – Sansa Fuze 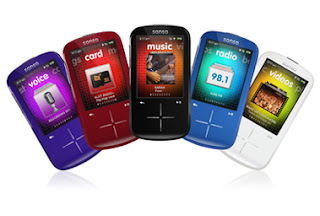 Or rather Mr. S’s ears…because as soon as he saw me opening the new Sansa Fuze that I’m reviewing, he snatched it from my hands and said MINE! When it comes to Sansa – it can turn a 58 year old man into a selfish 5 year old.  Mind you, the Sansa Fuze that I received was not black, it was not silver, it was MY favorite color – RED, but that didn’t stop him for one minute.

He immediately handed it back to me and said “FILL IT with the songs from my OLD Sansa” and while you’re at it, would you download the Chicago album with “25 or 6 to 4”?

That’s right I said…fill it with the songs from HIS OLD SANSA >>>>>>>>>>>>>>  (which is apparently what he’s calling his Sansa that was perfectly good yesterday…it seems to have aged dramatically over the course of the past few hours).  I have to agree that this new Fuze is a HUGE upgrade for him. For the past couple of years, Mr. S. has been taking his daily walks wearing a 1GB Sansa Clip.Each week I’d have to remove songs and add new ones, because 1 GB was not nearly enough storage. This new Sansa Fuze also plays videos, stores photos and has a built in radio.

<<<<<<<<< New Sansa Fuze!  Apparently he now thinks he’s hit the MOTHERLODE. You have to understand that Mr. S. is not one to adopt technology. He doesn’t have a smart phone, has never sent a text message and wouldn’t know how to turn on or use a computer if it had a 10 foot “push this button to use the computer” sign on it. But, when it comes to his music – he wants his mp3 player to be easy to use and hold enough music (and movies & photos) so that he doesn’t have to come running to me weekly to ask that I switch out some of the music.


Check out the features ~

BUT THAT’S ONLY THE BEGINNING. SanDisk also sent me a slotRadio card that includes 1,000 VH1 Classic songs. Mind you we’re in our 50’s – so VH1 is just Mr. S’s speed (they also have slotRadio cards with hip hop, Motown, Country, Rock, etc.). Do you have ANY idea how much money this is going to save me? Mr. S hasn’t even cracked the surface of this card and he’s already raving about how these are all of the songs that he’s been asking me to buy. Oh and this card uses up NONE of that 4GB in the Sansa Fuze.

So – this review basically comes from Mr. S. I can’t ask him TOO many questions or he won’t answer. So, other than what I had to say…here are his answers.

Overall, it’s a great little device for the holidays and would make a great gift for pretty much all ages.

I wrote this review while participating in a blog tour campaign by Mom Central Consulting on behalf of SanDisk and received the SanDisk Sansa Fuze+ and VH1 slotRadio Card to facilitate my review.

« Winning isn’t everything but….
Leasing vs. buying a used car »