You are here: Home / Buzz / K’Nex – connect with creativity in a box

Having come from a very creative background I can’t stress enough the importance of helping your children to really stretch their imaginations. In a world where so many kids just sit in front of the television and stare blankly at the screen, we need to be the one’s who instill the love of exploration, art, creativity, etc. in our young ones.

I suppose that I’m lucky that I come from a generation where my parents didn’t even consider DOING NOTHING a way to spend time after school. From a young age I was encouraged to create – which is how I eventually became an actress/dancer/performer.

Beginning early is essential. Toys such as K’Nex allow our kids to not only use their imagination, but they also begin building math and dexterity skills by creating structures out of the blocks, gears, etc. Since Team Mom sent me some K’Nex, I thought that I’d test them out with “D” and “J.” 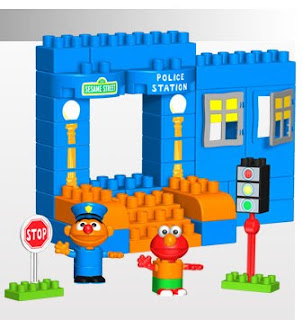 The Sesame Street Police Station Building Set (part of the Neighborhood Collection) is geared to children in the 2-5 age range. Using the Officer Ernie as well as Elmo characters from your children’s favorite show. your child will be able to build a police station. These blocks are larger for small hands and the set comes with 44 parts. At three years old “D” recognized his friends from Sesame Street and went to town building. I think that it was just fun for him placing the blocks one on top of the other. At first he didn’t even bother building the police station, he just had fun making his own creation.

The nice thing is that this set came with a set of directions for activities as well as various building ideas. So, as a mom, auntie or grandpa – you can act as a guide and participate with your little one. 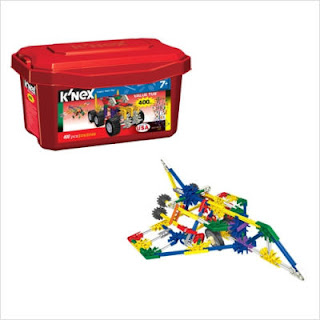 I was also sent the K’Nex Value Tub of 400 pieces. OMG – I was ready to play with it myself. This box of bricks, rods and connectors is for kids 7 and up, and as a 55 year old, I wanted in as well (funny how we become kids the minute we’re presented with something fun like this). I had “J” come over, mostly because I know how much she loves to build things. Five hours later, she was still at it. The dining room table had become the workshop and she was building everything from skyscrapers to futuristic flying machines.

Of course the set came with instructions, but who needs instructions when you have a vivid imagination?

I still LOVE these basic toys. Fostering imagination as well as laying the building blocks for learning, toys like K’Nex will ALWAYS be on the list for our holiday giving here at the mansion. Also, K’Nex will be donating 10% of all Sales from K’NEX Direct will go to THE CHILDREN’S HOSPITAL of PHILADELPHIA

The Sesame Street Police Station from K’Nex is under $25 (or under $20 at Amazon.com

), with is an affordable gift for the holidays. The Knex Value Tub 400 pieces