You are here: Home / Buzz / Iams Home for the Holidays

Most of us are planning a wonderful day with family this week…or like me, you’ve celebrated for 8 nights of family and fun. We even gave Clem our miniature bull-terrier his Hanukkah gift (he loves squeaky toys).  He’s  a lucky one. He’s got a family who loves and cherishes him. But, there are so many dogs and cats living in shelters that need adoptive homes.

Before moving to Florida, I was an active member and foster home for the New England Old English Sheepdog Rescue (we always had a housefull of OES’ including our own). Breed rescues like this do a good job of being able to match the dog to a loving family. It’s not always so easy with those pets who are homeless and living in shelpters.

Iams Home 4 the Holidays (IH4TH) needs your help to place 1.5 million pets into loving homes by January 4, 2010! Last year, the program’s goal of helping 1 million pets get adopted within three months was outdone when 1,202,701 pets were placed in homes — including Rumi, adopted by two-time Academy Award® winner and 2009 IH4TH ambassador Hilary Swank. 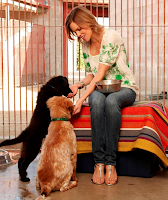 Hilary Swank is this year’s spokesperson for the IH4TH program. Ms. Swank has adopted MANY dogs out of shelters including her two dogs Karoo and Rumi. She rescued Karoo from the side of a road while filming in South Africa a few years ago and adopted Rumi last fall from a participating IH4TH shelter in Los Angeles and feels that this cause is “close to her heart.”

HOW CAN YOU HELP?

« Alice.com – because everyone needs an Alice
So Excited – SATC2 »