When “B” “walked” last May I thought that I was finally done with the whole College Experience thing. It only took him over 6 years to get his BA. To say that he was distracted at first would be a huge understatement. When he finally realized that partying the nights away meant more years in school, he buckled down and got serious.

Unfortunately, economic times are a little tough and the job outlook (at least in RI where he lives) is VERY bleak. A couple of his professors approached him at the end of the school year and suggested that he stay on as a student and begin working on his MA. They offered him an assistantship (which would mean low cost or FREE school PLUS a JOB with pay), and he jumped at the chance.

For him it’s another two years of school, for me – it means I still have a kid (ok, adult) in college. No matter HOW OLD he is, he’s still my baby and I’ll always worry about him being 1500 miles away.

After year ONE, he refused to ever step foot in the school cafeteria again. He claimed that many of the missed days were due to being ill from the food that they served. I began to notice an increasing amount of fast food, coffee shops, etc. showing up on his charge card.

For the past five years my dear son has been dining on Dunkin Donuts, Subway and McDonald’s (among other places). I’m not saying that it’s all BAD – IF he makes good choices, but the expense added to the fact that he’s probably choosing fries over a salad 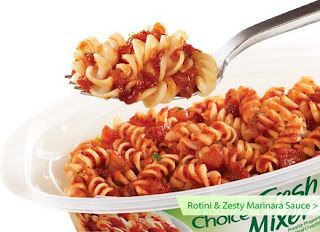 is just NOT GOOD. I’ve asked him why he does it and he says that there’s a huge time factor, that he’s too rushed to make a lunch, etc.

Because he works in one of the computer labs (as well as a 2nd job outside of school) he has access to a microwave for his lunch/dinner, so he can EASILY prepare food on site.

Healthy Choice recently sent me some of their great All Natural Entrées to try and suggested that these might be a great alternative to the “usual” college care packages that we moms send out kiddos. They sent me a few of their products to test at home and I tried some myself and sent the rest on for a care package to “B.”

My favorites to send him? The Healthy Choice Fresh Mixers and Soups that don’t have to be refrigerated, but are microwaveable. No “tools” (like a can opener) are required and they can easily be eating Tuscan Style Chicken, Ziti & Meat Sauce and more. I suggested that the next time he goes to the grocery, he stock up on these and just leave them in his car. That way there’ll be no excuses (and less $15 charges at the fast food places).

Did you know that college students feel the golden ticket to healthy eating is SIMPLY HAVING ACCESS to healthy foods? AND that in a given week, college students say they average about ELEVEN MEALS at home in their dorm room or apartment – BUT ONLY HALF OF THOSE ARE HEALTHY.

If you know what your child LOVES to eat, why not put together a care package for him/her and show them how much you care. Sometimes small gestures mean so much, especially when they are so far from home.
My suggestion – try some of the new Healthy Choice meals for YOURSELF and pick out the one’s you KNOW your college kids would love. Keep them on track for healthy eating and show them just how much you care.

Check out HealthyChoice.com to print coupons for $1.00 off Fresh Mixers and $2.00 Frozen Meals.