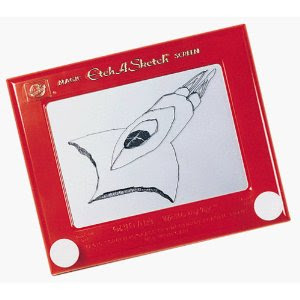 I was 6 years old when Etch-a-Sketch

made it’s first appearance on toy aisles. I remember begging for one and my parents giving in. That Etch-a-Sketch saw LOTS & LOTS of play (between Rob and I), although I have to say that neither of us were particularly good at it. That didn’t stop me from using it to “CREATE MASTERPIECES” day after day.

While 50 years later, MY Etch-a-Sketches will never be seen in a museum or art gallery, my son Ben and hopefully  my grandchildren will get the opportunity to enjoy this classic toy just as I have.

One of the things that I adore about toys like this, is that they foster creativity. While newer versions have come out of the market, like the upcoming  Etch A Sketch Glow Sketch

, the basic principle and usage of this toy remains the same.

Ohio Art was nice enough to send me a Classic Etch A Sketch, but I’m going to spare you my scribbles. It seems that I’ve not improved much since 1960, but that’s OKAY with me. I still love using those dials to create my works of art and turning the screen over and giving it a good shake to get rid of it, in order to start again.

By the way, I checked out the Etch A Sketch site to find that you can DOWNLOAD Fun Screens to use (they just need to be printed on transparency film and used with the Etch A Sketch Freestyle) that include connect the dots, puzzles and more.


In honor of this  anniversary, the Ohio Art Company has teamed up with Red Robin to celebrate the iconic toy. During the month of July, Red Robin will be sponsoring the “Etch-A-Sketch A Burger Contest”, which encourages artists both young and old to draw their favorite burger on an Etch-A-Sketch and submit a photo of their drawing to www.redrobin.com/etchasketch. 50 entrants will win a limited edition 50th Anniversary Etch-A-Sketch and a $50 Red Robin Gourmet Burgers gift card!

Happy 50th birthday Etch A Sketch – I probably won’t be around for your 100th, but I’m sure that you’ll still be going strong.

Thank you to Ohio Art for providing me with toys for this post. I was in no way compensated and all opinions are strictly my own.

« 5 Ways to stay COOL as a cucumber this August
How can you visit NYC without – SHOPPING? »