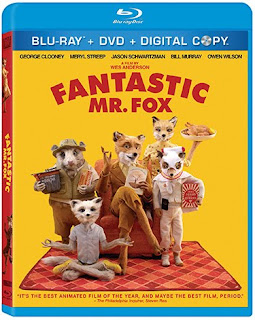 Fantastic Mr. Fox
When I first saw the trailer for Fantastic Mr. Fox, I was sitting in a dark theater waiting for a film to begin. I turned to my hubby and gave him the thumbs up (which means that we’ll have to see this one). He responded with the same thumbs up. Unfortunately, we never got to the theater to see it. Bro’ B  however did and he hasn’t stopped jabbering about how great it is ever since. As a matter of fact, when he heard that I was going to be screening and writing this review, he got a little upset with me (actually told me that “I OWED” him for not letting him write it). With all of this hype, I was afraid that I’d be setting myself up for a letdown.
I remember reading Fantastic Mr. Fox

by Roald Dahl to B when he was young and Wes Anderson has not only captured this foxy character and brought him to life, but he’s made a film that has a wide ranging appeal. Children will love the stop action puppets and visuals, while adults will be drawn in to the snarky dialogue. While some of the issues may be over the heads of little ones (like the fact that Mrs. Fox might have been the town tramp in her younger days), others will surely delight in them.

Be aware – there is a LOT of cussing in this film. No, you won’t hear anything shocking – simply the WORD CUSS in place of what would have normally been a swear (“the cuss you are” – “no, the cuss YOU are”). This will bring giggles to both young and old. The “cussing” scene between Mr. Fox (George Clooney) and Badger (Bill Murray) is classic and I’m get a little giddy just thinking about it.

This is the story of a sly fox who needs to make one last score…..of chickens that is, and I think that he fancies himself as almost a James Bond type of character. The entire family gets involved in his caper to steal chickens and you get to see some wonderful family dynamics as Ash (Jason Schwartzman) becomes very competitive with his cousin Kristofferson (Eric Anderson). Mrs. Fox (Meryl Streep) attempts to keep the peace, as mom’s most often do.

With incredible performances by Bill Murray, Meryl Streep, Bill Murray, Owen Wilson (Coach) and Willem Dafoe (as the Rat) you’ll soon forget that these are stop action puppets and begin to see them as people.

This is one of my MUST SEE films of the year.

For more great reviews and information about movies follow hashtag #couchcritics on twitter! We’ll be talking movies and more with @Blockbusterexp.

For the LATEST in DVD rentals sign up for Blockbuster Express’ New Release E-mail (and get a FREE rental on them).

Enjoy (oh and don’t forget to pick up some popcorn)!

I wrote this post as a member of the Collective Bias #couchcritics. I was in no way paid for this post and all opinions are strictly  my own.