You are here: Home / Buzz / Doggie dementia is a real thing – here’s how we are dealing with it 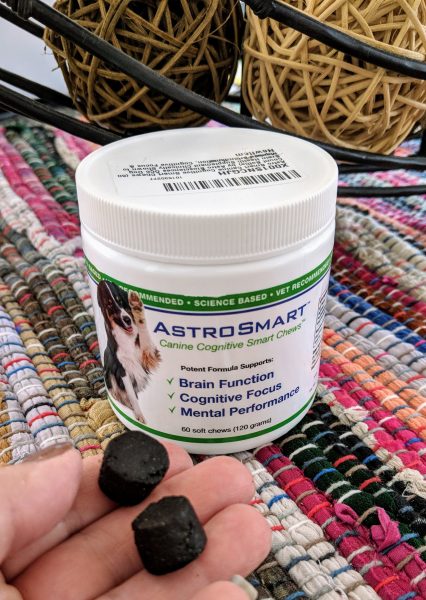 Clem had his yearly vet appointment a few weeks ago. I went prepared with LOTS of questions, as his health had been declining. I know dogs and I know them well (Mr. S calls me the dog whisperer). Over the past few months I’d been seeing a decline in my 4-legged baby’s mental health. He was exhibiting many of the signs of CCD/CDS.

Just like we humans, as a dog gets older the lose a certain amount of brain function. If you’ve ever had an older dog you may have noticed them just staring into space or walking into things that they’ve always been able to maneuver around. The signs can be like those or (as in Clem’s case) wandering throughout the night, banging into things, etc. Some dogs cry a lot more, others want constant attention. Eventually it may get to the point of them “going” in the house (lucky you – to find it in the morning). It is all the equivalent of dementia or alzheimer’s in humans, and diagnosing the disease should be left to your veterinarian, as there are a lot of other medical conditions that exhibit these and similar signs that you DON’T want to miss. 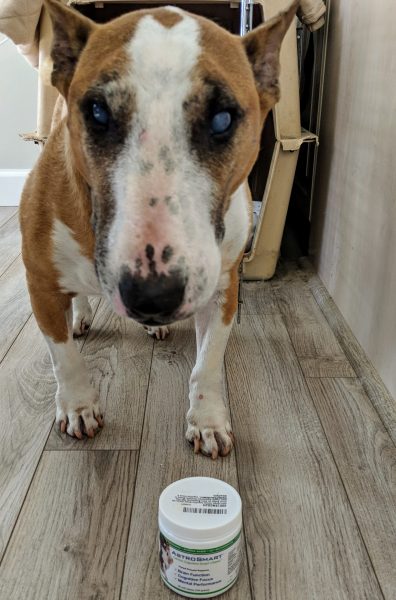 I was at my wits end

Tippy – Tap, Tippy-Tap….all I could hear ALL NIGHT LONG were Clem’s nails (yes, we keep them trimmed) against the laminate flooring. It would begin around 11:00 pm and last through 3:00-4:00 am. I got NO sleep. I tried corraling him in the kitchen, I put blankets on the floor, but along with the sundowning (Alzheimer’s patients also wander in the evening which is why it is called Sundowning – dog’s do it later in the night) he was walking into things….our bar, furniture, all sorts of things. In the morning we’d fine cuts and scratches on his nose and furniture pushed around. I was exhausted, but even worse, I felt horrible that I couldn’t help him. We’d tried EVERYTHING

BUT NOTHING WORKED…not a single solitary thing 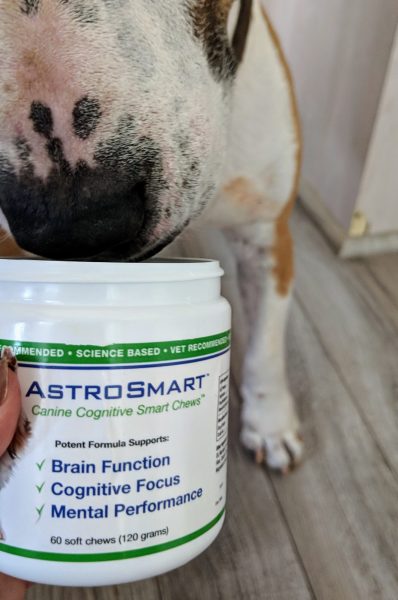 I had posted about the issue I was having and a follower of mine tagged a PR person for a supplement called AstroSmart. She offered to send me a jar of 30 chews (which for Clem would last 15 days). It was supposed to improve brain function, cognitive focus and mental performance in dogs. I had been reading about the use of MCTs (from Coconut Oil) and how it is now the first line of defense for Alzheimer’s patients and they were looking into it for use in dogs as well. AstroSmart contained this among other herbs and vitamins that help calm and help with general stress. I figured it was worth a try….I’d be no worse off than I was before I started giving it to him.

On Day 12 our veterinarian called me

I told him that I had taken Clem off of the trazadone, CBD and Melatonin and I was giving him AstroSmart and that it was working. There was silence on the other end of the phone….he had not heard of the supplement, but I explained about the first ingredient being MCT powder, along with Phosphotidylserine, Resveratrol, B6, Omega 3 and Vitamin E, and he knew EXACTLY what I was talking about. He was as relieved as I was that Clem was doing better and told me to follow up in a couple of months unless he took a turn for the worse. 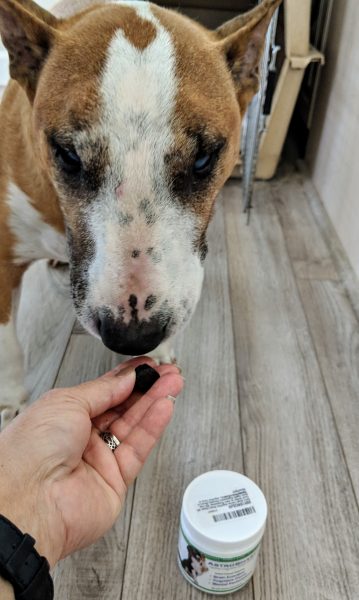 Each case is different. I do wish that I had found this supplement EARLIER, since I know how important preventative measures are. When dogs hit about 10 – 14 years old their mental focus starts to decline. It’s important to keep their minds busy by taking them out for walks, getting them sunshine, playing with them and giving them something to think about. If you read Champagne Living regularly, you also know that I’m adament about getting him the BEST food that I can, and now I know that supplementing their diet with healthy vitamins, minerals and AstroSmart is part of our healthy regime.

My sister in law came over the other day

Her reaction was….this is the Clem that I remember. He his back to his old self. He’s begging for food, jumping up on the sofa and crying when he sees me (he had stopped doing all of those things). 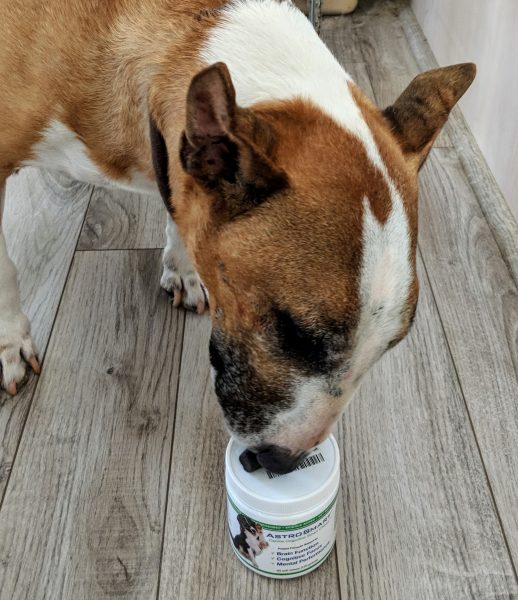 AstroSmart is our little miracle

But, I couldn’t keep it my little secret, because I know that all of  you with dogs will eventually have to deal with an aging dog, and I truly believe that AstroSmart can keep a dog younger, more alert and energetic. 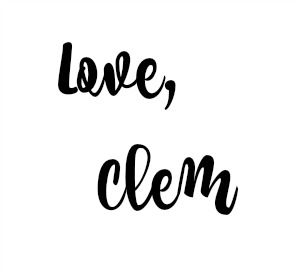