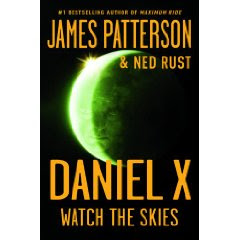 How can you NOT buy the next ANYTHING written by James Patterson? IMPOSSIBLE!

Having read the first novel in this series, The Dangerous Days of Daniel X

, I couldn’t wait for the new follow-up novel written by James Patterson and Ned Rust: Daniel X: Watch the Skies

I certainly wasn’t disappointed!
When Graff and Altreda, good aliens brought to Earth to protect humans from bad aliens are killed by The Prayer, Daniel X is orphaned at 3. Now fifteen, Daniel has followed in his parents footsteps as an Alien Hunter, seeking out the bad aliens on The List of Alien Outlaws on Terra Firma. Daniel has been discovering his alien powers: smelling alien sweat from ten miles away, and making high performance hybrid engine racing bikes that can travel 3,000 miles at 75 mph on a gallon of gas.
But his coolest power of all is his ability to create his alien best friends Willy, Joe, Emma and Dana – as well as his dead Mom, Dad and sister, Pork Chop – out of his imagination.

On the trail of Alien Number 5, a giant electrified catfish and his cohort, Number 21, a monkeyish ape and their minions, Daniel and his friends and family end up in small town Holliswood.

Their page-turning adventures to keep Number 5 from destroying the Earth drives a book that you just can’t put down until the last page.

This book is written for readers teen to adult, with appropriate language. There is violence, but Patterson and Rust do not dwell on it. It sends the message that our imagination and powers of creation are limitless, a good message for both alien and human!

Rating is based on a 5-star scale

« Egg on my face review and giveaway.
Book Review – B as in Beauty »