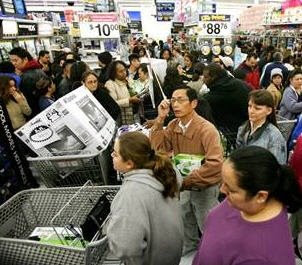 I have to tell you that I am NOT a Black Friday shopper. I much prefer shopping from my computer and being done with it. I don’t have young children to buy for anymore (my son is in his mid 20’s), so I really have NO reason to be waking up at an ungodly hour and standing in line (getting cranky) only to find that they’re out of what I’ve waiting for.

But, I DO understand that in this awful economy that saving money on gifts is VERY important. So, I thought I’d look over the Black Friday ads and see what looked worth buying.

The best deal seems to be the $350 laptop packaged with the Canon 3 in 1 printer at Best Buy.

Oh, & in case you hadn’t heard – they’re having a SECRET online sale as well (shoot, did I just tell a secret?)

wigix has 10 of them available at 12:01 on Thanksgiving morning for only $149 each – hey, it’s worth a try. You must be a registered wigix user, and you can sign up NOW!

As I look over the ads, one of my LEAST favorite stores actually has the more interesting ad – Wal-Mart. Here’s what I’m seeing

But, still nothing for me…

eBay is having their $1 doorbuster event – NOW through December 8, with deals and SWEEPSTAKES galor.

Speaking of Sweepstakes – a Thanksgiving tradition around our house always includes the: