You can be among the FIRST to see the premiere of the new HBO movie Grey Gardens with Drew Barrymore and Jessica Lange. 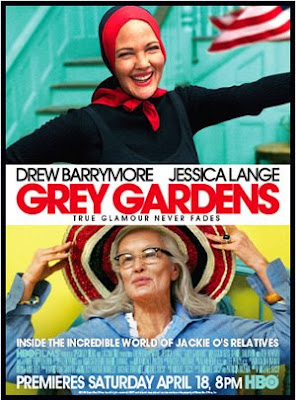 It is being shown in a LIMITED number of cities including:

If you’re in or near one of these cities, you can sign up for FREE TICKETS at Entertainment Weekly.

Drew Barrymore and Jessica Lange headline this fact-based drama centered on the two eccentric relatives of Jackie Kennedy-Onassis who served as the subject of David and Albert Maysles’ similarly-titled 1975 documentary. Directed, produced, and co-written (along with Patricia Rozema) by Michael Sucsy, Grey Gardens tells the story of Big Edie (Lange) and Little Edie (Barrymore), the aunt and cousin of Kennedy-Onassis respectively. The reclusive socialites made headlines across the country when the health department threatened to raid their sprawling, flea-and-raccoon-infested twenty-eight room East Hampton, NY mansion in the early-1970s, prompting Kennedy-Onassis herself to intervene in an attempt to save the family name. Jane Tripplehorn stars as former first lady Kennedy-Onassis in a film also featuring Daniel Baldwin, Ken Howard, Malcolm Gets, and Ayre Gross. ~ Jason Buchanan, All Movie Guide