You are here: Home / escape / 7 Ways to Slash your Travel Expenses – guest post by Steenie Harvey 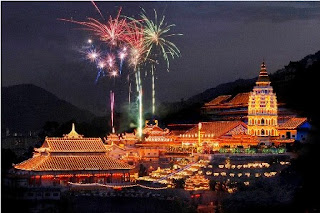 Despite their concerns about the economy, Americans are still traveling, according to a Fast Park survey. Says a report on CheapFlights.com, “Fast Park found that 66 percent of its customers planned to book the same number of vacations and purchase airline tickets in 2009 as they did last year.”
While this news may be surprising, it’s no shocker that the people who plan to travel are searching for bargains.

I just returned from Southeast Asia, and it was full of budget-friendly deals.
The best buy? An airline ticket with AirAsia. Flying from Kuala Lumpur, Malaysia’s capital, to Penang Island cost me the equivalent of $9.45, taxes included. And it wasn’t a travel writer’s discount. If booked at the right time, that budget fare was available to everyone.

Although freebies and discounts are part of a professional travel writer’s life, you usually need to have a few stories published before you’re treated to “hospitality.” When starting out, most have to make their dollars stretch as far as possible.

And even if travel writing doesn’t figure in your plans, it doesn’t require wads of cash to explore exotic places. Not if you start thinking like a cheapskate writer.

Okay. I lucked out and got a generous media discount (and an upgrade to club status) at the Manila Hyatt. But although lounging in luxury is fun, I’m really a Scrooge at heart.

So if you dream of exploring Asia this year, here are seven tips to help you slash your budget:

1. Scratch Japan, Singapore, and South Korea from your schedule. They’re not inexpensive countries – and their high-profile beach destinations are for well-heeled tourists only. Nice if you can afford it, but Thailand has far more to offer than the beaches of Phuket and Koh Samui.(Besides, White Beach on Boracay Island in the Philippines outdoes them both – and it’s a better value.)

2. Asian Web travel agencies often supply better discounts than you can get from major U.S. booking sites or by contacting the hotels themselves.
Here are a couple of deals I got: Through asiawebdirect.com, a double with breakfast at Kuala Lumpur’s Swiss Garden Hotel was $61. In the Philippines, at the Carmela de Boracay Hotel facing Boracay Island’s famous White Beach, a double with breakfast was $71 through agoda.com.

3. “Budget accommodations” doesn’t have to mean grungy backpacker hostels.
On Borneo, I met a retired British couple staying in a Kota Kinabalu guesthouse for $18 nightly. Private room, air conditioning, power shower, Internet, free airport pickup – they had no complaints. For them, “flashpacking” throughout Asia for five months worked out cheaper than staying at home.

4. Eat with locals.
Just because a meal costs only a dollar or two doesn’t mean it’s unsafe – or that a plastic-table joint is unhygienic. My only caveat is to avoid empty restaurants. They’re usually empty for good reason.

5. Vietnam is an exception, but organized excursions can be outrageously expensive.
Before signing up, check to see if you can make the same trip yourself using public transport. For example, I went snorkeling on Sapi Island, off Northern Borneo. Return ticket on a public ferry: $4.75. Hire of snorkeling equipment: $4.20. A seafood noodle lunch with fresh lime juice: $2.80. Total cost for me: $11.75. The same trip with a local tour outfit costs $36.40.

6. On the same subject… if you’re traveling with someone else, hiring a taxi for the day is often cheaper than a tour.
My husband and I have done all-day taxi trips in both Thailand and India for under $60.

7. Be creative, and you’ll unlock lots of adventures for very little.
Ride a jeepney in Manila – less than 10 cents for one of the most unforgettable rides of your life. Delve into a night market. (You don’t have to buy anything.) Try a fish pedicure. (In Malaysia, it costs only $6 to $8.) And why visit a fancy spa for a traditional massage? You’ll find many beaches where you can have for one for $2 or $3.

[Ed. Note: Start your own Internet business, and you can work from anywhere in the world. Get a step-by-step guide to getting your own Internet business up and running right here.
Steenie Harvey gets paid to visit white sand Caribbean beaches… wildlife sanctuaries in Borneo… Indian Ocean hideaways… Rome… Paris… and beyond. To find out how you can do the same, and learn how Steenie got her break in travel writing, join The Right Way to Travel FREE e-letter.]

This article appears courtesy of Early To Rise, a free newsletter dedicated to making money, improving healthsecrets to success. For a complimentary subscription, visit http://www.earlytorise.com and .