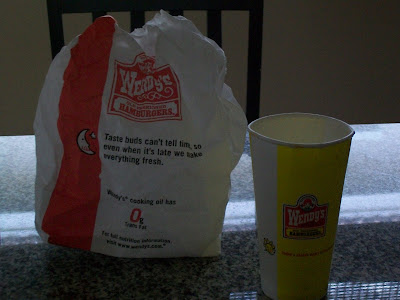 I consider myself a Buffalo Wing connoisseur of sorts. When my husband owned the 3 Steeple Street restaurant at the foot of College Hill in Providence, RI he made what I thought were GREAT Buffalo Wings. Each afternoon he’d put bowls of them out on the counter for “Attitude Adjustment Hour” and patrons as well as the staff (myself included) would scarf them up.

BUT – nothing ever beat the wings at the Mad River Tavern up in Campton, NH (near Waterville Valley). I may have disliked the snow and cold, but I couldn’t wait to go skiing, or rather EATING (because that’s where we’d go after a cold day on the slopes). I’d look our server straight in the eye and say “Wing Me.” We’ve been going there for so many years, that there was never a QUESTION as to which I wanted. Unfortunately, now that we live in Florida we only get up to New England once a year, and this year we never made it up to New Hampshire. 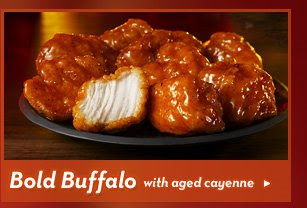 Last week I ran into my neighborhood Wendy’s to grab a quick snack and saw that they now have a variety of boneless wings including Sweet & Spicy Asian Chicken, Honey BBQ, and YES BOLD BUFFALO with aged cayenne. I ordered myself the Buffalo wings, came home and savored every last bite of them.

Two days later my e-mail includes a request from MomCentral to try Wendy’s new wings and write about them. Um – I responded with a resounding YES (and never told them that I was already a fan).

So, last night it was off to Wendy’s again to *ahem* try these wings to review. While I SHOULD have tried one of the other varieties, I’m a creature of habit when it comes to things that I enjoy – so BOLD BUFFALO WINGS it was.

Now, buffalo wings are EASY to make (and it amazes me when a restaurant gets it wrong). The sauce is simply hot sauce (my favorite is Frank’s) and butter and maybe a little KICK of extra heat if that’s how you like it.

I have to say, that for a fast food restaurant – WENDY’S GOT THIS RIGHT. They’ve stuck to a traditional buffalo recipe and use all white meat boneless chicken for these wings. They’re simple and they’re H-O-T!!! Just the way I like them. Now, personally I prefer the REAL DEAL (actual wings), but for a quick treat from Wendy’s, these Bold Buffalo Wings satisfy the craving.

I wrote this review while participating in a blog and giveaway campaign by Mom Central on behalf of Wendy’s and received a sample to facilitate my candid review. In addition, Mom Central sent me a gift card to thank me for taking the time to participate.