You are here: Home / escape / There may be sand, but it’s not the beach – Beirut 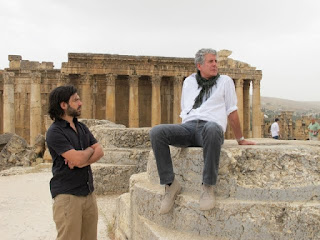 Back in 2006, when Tony last visited Beirut, it was in a very sad state. His visit began quite nice, and Beirut first appeared to be more like a resort (like Miami Beach), than a worn torn country. Unfortunately, his visit turned sour and the city was under siege. Tony spent his time holed up in his hotel, and then having to leave from the bombed out airport – he realized that he was smack in the middle of war. Ever since then, he’s wanted to return to Lebanon, to experience the country as it SHOULD have been seen.


Beirut used to be the Paris of the Mediterranean (back in the ’60’s). It is a  multicultural city, with various religions, political beliefs, languages, etc. Unfortunately, there are still a lot of problems there, and while the downtown area is trendy and cool,  ten minutes away you will find the destruction that the war has caused. Still, for Tony – being in a multicultural city like this means one thing….LOTS of different kids of food.

Lebanon is absolutely gorgeous. With the coastline, the mountains, the seafood, lamb, and produce, it sounds like such an idyllic spot…if it weren’t for that darned war. I’m looking forward to seeing the beautiful side of Beirut this week (since it seems that all we hear are the horrors of war).
Don’t forget to tune in Monday at 10 E/P on Travel Channel and see what Beirut looks like NOW!

Shop Shop All, Sandals, Accessories, Platforms and more. Get this widget.