You are here: Home / Silver-Platter / Theatre twofers & a sweepstakes that will keep you in your seats!

How I wish that I were in the NYC area right now. First it was the 20at20 promotion, where you could buy tickets to an off-Broadway show for only $20 20minutes before the show, and now 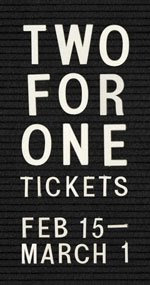 go is offering 2for1 tickets to 30 off-Broadway shows including

The full list of shows as well as promo codes can be found on nycgo.com

This promotion is running from February 15 – March 1 (so, for a change I’m listing it in advance)

Kathleen Turner. Cynthia Nixon. Maggie Gyllenhaal. And those are only a few of the celebrated actors you can now catch Off Broadway with On the House’s offer for two-for-one tickets. From smash-hit musicals to one-man shows to Shakespeare to a production of Virginia Woolf’s only play, experience the excitement of Off Broadway. There’s even a list of restaurants offering a free pre-show drink with dinner.

You can catch the excitement of Off Broadway year-round when you enter the On the House sweepstakes. Six winners will receive two Off-Broadway show tickets per month for an entire year. So go ahead, enter your information below for the chance to see 12 amazing Off-Broadway shows—completely on the house.

Get your tickets early before they’re SRO – and CURTAIN’S UP!

Don’t miss ANY tips for living rich on less, subscribe to Champagne Living via e-mail or reader.

« Dinner out for less than dinner in .
Rich Living vs. Living Rich »