You are here: Home / Buzz / The Roadie vs. The Rocker – Guitar Hero for DS 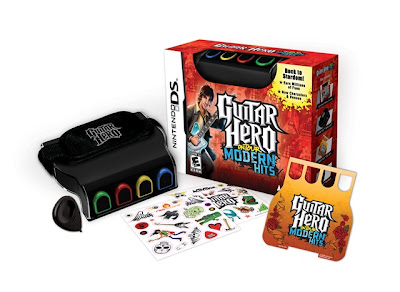 Don’t you just love it when the kids decide to compete over something and it works to YOUR benefit?

We were sent copies of Guitar Hero On Tour: Modern Hits and the Guitar Hero On Tour: Decades for Nintendo DS to review from Mom Central. My not so little reviewers were ages 8 (Theresa), 22 (Steph) and 25 (Ben). My goal? To see if I could get these kids and adults with ages that are SO FAR APART to actually hang out together for the afternoon.

What I didn’t expect was that there’s be screaming laughter, smiles and fierce competition. The three of them devised a competition that ANYONE would love. The winner would be crowned the Rock God or Goddess and the loser was destined to be a Roadie. The Roadie would have to WAIT ON THE ROCK GOD(DESS) for the remainder of the day. The penalty for losing included getting drinks from the fridge, cleaning the Rock God’s room, etc. – because isn’t that what roadies do?

Set Up – All 3 had a difficult time trying to get the extension pad to click in. Once it was there, no one wanted to take it off. For some reason it just wouldn’t “click” in. After a few tries, Ben got it set up on both of the DS systems that they were using.

Music – The songs definitely appealed to the 20 something set. I could hear the music and I KNOW that adults would like it as well. Guitar Hero On Tour: Modern Hits has music for EVERY rocker, including indie rock and cool art rock (like Weezer, Coldplay, Fall Out Boy and more).

Game Play – This crew was used to playing the “regular” Guitar Hero games and using the pad took a little getting used to. There’s definitely a learning curve. Ben got it REALLY quickly, followed by Theresa – Steph gave up early in the competition.

Even on the EASIEST setting this game was challenging. I think that’s why Steph gave up (she doesn’t like working hard at anything). This quickly became a competition between Theresa (8) and Ben (25).

Fun Factor – Judging by the laughter and the fact that this competition seemed to go on FOREVER (neither one wanted to clean up after the other – they’re both slobs), I’d say that this game was great fun. It kept them busy for a good long time.

Notes: In order to play this game, you really have to be someplace that you won’t disturb others. You obviously need the sound in order to play and this rocking music was turned WAY up in our house.

The Final Results: Ben won. He didn’t even give Theresa a chance. Theresa didn’t want to clean Ben’s room (I don’t blame her), so they compromised. Ben LOVED the game and he plans on playing it with friends, Steph continues to be a diva and is refusing to ever play it again (I think that she just didn’t want to lose to an 8 year old) and Theresa has challenged Ben again and again.

This game is challenging and a LOT of fun. Just be aware that there’s a learning curve and the older kids might have an easier time with the manual dexterity.

***Guitar Hero is running a giveaway in conjunction with their Facebook Page. They’re giving away all 3 Guitar Hero games for Nintendo DS, a Nintendo DS Lite and MORE. The giveway ends on July 10th, so HURRY if you’d like to try to win one.***

No longer satisfied with Roadie Status, Guitar Hero On Tour: Modern Hits will have both kids and adults being the Rockers they’ve always dreamed of. Hmmm….if the kids form a band, does that mean I’m the Shirley Jones of the family?

« A Little Piece of Happy
Momfluence Summer Guide and Giveaways »