You are here: Home / Buzz / Shhhh my secret fathers day gift – the Roku 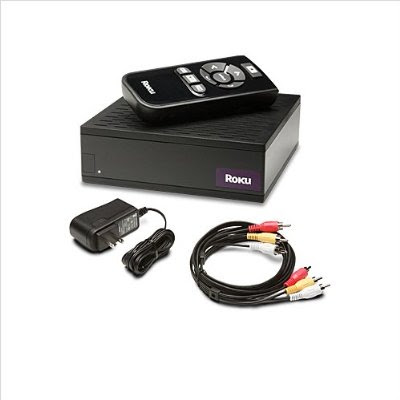 Mr. S is a HUGE movie fan. I think that if I canceled our cable and our Netflix subscriptions that he’d have NO IDEA what to do. I mean, how much golf can a person play (um, that’s a rhetorical question, if you’re a golfer I KNOW what you’re thinking)? So, it would make sense that this Fathers Day I’d have to find something that he’d absolutely LOVE!!

I was pretty excited that Roku was sending me one of their Netflix players to try out. I’d JUST started hearing a little bit about them and I was curious as to how they work. If you HAVEN”T heard about Roku – it’s a little box (about 1/4 of the size of your cable box) that streams high quality movies from Netflix and Amazon Video On Demand from the Internet to your television set. 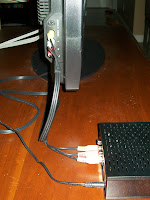 Since I was setting it up and using it on the QT (I didn’t want Mr. S to know – since it MIGHT be his gift) I was a little concerned. I’m not known for my technical savvy! But setting up the Roku was EASY! It’s basically PLUG and PLAY! Simply use the component cables that come with the box (I’ve since switched to an S-Video cable that I found in a drawer), put batteries in the remote, plug it in and VOILA! Total set-up time = 3 minutes.

Once the Roku unit was plugged into the TV, it walked me through a the set-up RIGHT ON MY TV screen. OK, I have an admission to make. I did call tech support to find out how to get the screen up – duh – I basically forgot to turn the television on. The pleasant voice on the other end of the phone asked me if I had remote control for my television and told me to click on “input” until I got to where I had connected the Roku. 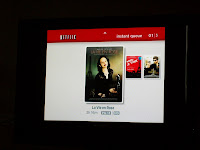 Once my Roku had found my router, I saw the MOVIES that I already had in my Netflix queue that were available for instant play. If you’re worried about there not being ENOUGH movies to access – Netflix has over 12,000 movies and TV shows – including hundreds in HD – instantly from Netflix over the internet starting at only $8.99 per month (if you rent movies now – you’ll see the savings on the 2nd or 3rd movie that you watch). If you don’t have (or want) Netflix – you can rent movies directly from Amazon.com (over 40,000 movies & shows are available) from .99+. You can even get movies THE DAY THAT THEY’RE RELEASED ON VIDEO from Amazon.

Here’s the BEST PART! Not only do I not have to WAIT until the movies come by mail – but this little player costs under $100.

I’m thinking that this box is a keeper. I even told my son about it and he wants one for his birthday in August. Not only is this a GREAT Fathers Day gift, but it’s definitely going to benefit the WHOLE family.

You can find the Roku Digital Video Player

at Amazon.com or directly at Roku for around $99. Happy Fathers Day!

« Bridget’s Season Finale
Can we be a One Car Family – & still live the good life? »