You are here: Home / Buzz / Put a little extra money in your pocket – start a small business

One of the easiest ways to put some extra money into that Gucci purse of yours is to start your own business.

WHAT? The economy is TERRIBLE. Why would I want to start a business NOW???

Forget those comments I just wrote. Some of the BIGGEST and most solid companies were born during recessions. Burger King, FedEx, Trader Joe’s – and the list goes on and on. Now, I’m not suggesting that you undertake a large venture such as these (although if that’s what you want, I wish you great success). I’m talking about starting a small work at home business.

Over the years, I have done just that. Years ago my mother and I opened a booth at a flea market. We’d spend the summer months up in New England and part of the winter in Florida sitting under an umbrella selling jewelry. The hours were great (as I’m an early bird) with the day starting at about 6:00 am and ending at noon or 1:00 pm. Sometimes we’d work both Saturday and Sunday, other times we’d just do it one or the other. No, neither of us got wealthy doing this, but it provided our FUN money for the week (usually an extra $100-$200 each). There were plenty of vendors making a week’s pay working just the weekend, but we were really there to make fun money.

Later, when my husband took ill for the first time and there was no income coming in to the household, I began an eBay business. I was determined to make a living at it and worked HARD to get to PowerSeller status (since being a powerseller also meant that not only was I making good money, but I’d have access to the benefits offered such as health insurance). Now, I only dabble in eBay now and then, since I’m trying to enjoy this Florida retirement that I’ve been able to create with my Champagne Living techniques. 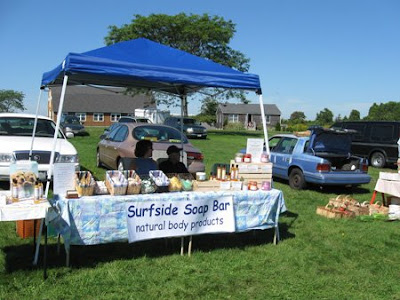 One of my close friends, Sandy has two small businesses that she runs from home. She cleans homes during the week (she’s a bit of a neat freak…I can barely keep my own house neat and clean) and she spends her weekends at the farmers markets in Rhode Island selling her Soaps and Body Scrubs to a very willing audience. She spends her time during the week creating and packaging these inexpensive luxuries. She’s a natural salesperson, because she really believes in her products. I’ve been trying to convince her to expand the Surfside Soap Bar to make it easy for her customers to buy during the winter as well through the Internet.

So, how does one begin? First you need to find some wholesale suppliers. It’s a lot easier than you think. You’ll need to have a resale certificate. In Rhode Island I was able to do that via mail for about $15 and I have one that I applied for at my local tax office here in Florida for even less. Once you decide what you’d like to sell, you might want to go to one of the large wholesale trade shows. These shows are free to attend and you’ll find a huge array of products

If you’re looking to start selling on eBay they will take you step by step through the process from the “sell” tab. I always used PayPal (which is now owned by eBay) as well as their own shipping program, so that I could print mailing labels for shipping out right from my computer. If you haven’t tried selling yet, go through your house and look for something that you no longer use or want and do a TRIAL run by selling it. My first month was spent selling books & CDs that I no longer wanted and I was able to figure out the best way to sell these by trial and error, without wasting money on products that I had purchased to sell. So, give it a try….you might put a few more dollars (or more) in your pocket.

If you have ANY questions or suggestions, please use the comments and I’ll see if I can either answer you or find someone (or site) that has the answers.