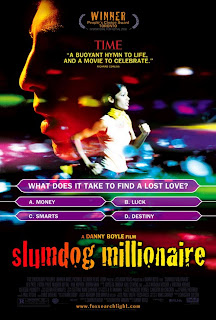 I had mentioned that there was a FREE pre-screening of “slumdog millionaire” courtesy of Fox Searchlight. When I last posted about this there were only a few screening cities listed. The list has GROWN to include screenings in 52 theatres throughout the country. You can still sign up to get your pass at Fox Searchlight. The screenings are on set dates from November 10 – December 22. I find it interesting that the film opens on November 12, but the free screenings are being run through the end of December.

“Winner of the 2008 Toronto Film Festival People’s Choice Award, SLUMDOG MILLIONAIRE is the story of Jamal Malik (Patel), an 18 year-old orphan from the slums of Mumbai, who is about to experience the biggest day of his life. With the whole nation watching, he is just one question away from winning a staggering 20 million rupees on India’s “Who Wants To Be A Millionaire?”

But when the show breaks for the night, police arrest him on suspicion of cheating; how could a street kid know so much? Desperate to prove his innocence, Jamal tells the story of his life in the slum where he and his brother grew up, of their adventures together on the road, of vicious encounters with local gangs, and of Latika (Pinto), the girl he loved and lost. Each chapter of his story reveals the key to the answer to one of the game show’s questions.

Each chapter of Jamal’s increasingly layered story reveals where he learned the answers to the show’s seemingly impossible quizzes. But one question remains a mystery: what is this young man with no apparent desire for riches really doing on the game show?

When the new day dawns and Jamal returns to answer the final question, the Inspector and sixty million viewers are about to find out…

The result is the sweeping, stylish, intoxicatingly human experience of SLUMDOG MILLIONAIRE, the new film from acclaimed director Danny Boyle (TRAINSPOTTING, SHALLOW GRAVE, MILLIONS, 28 DAYS LATER, SUNSHINE). Part exhilarating love story, part eye-catching journey into the underbelly of the so-called “maximum city” of Mumbai, part stirring tale of an Everyman’s triumph against a harsh, cynical world, SLUMDOG MILLIONAIRE is a visceral, action-packed Dickensian epic for the 21st Century. At the heart of its exuberant storytelling lies the intriguing question of how anyone comes to know the things they know about life and love.”