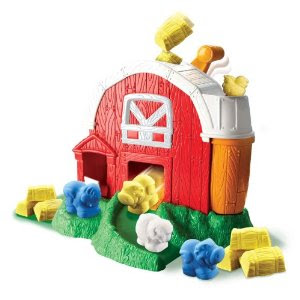 I was always taught that the moon was made of green cheese (or is that cream cheese?). I guess that I was wrong, very wrong – because a week ago I received a box of Moon Dough Magic Barnyard by Spin Master

, so dough it is. Did I mention that it came with a barn, that cranks out moon dough barnyard animals?

Let me start again. What child doesn’t enjoy being creative with dough? Now, we grew up using a different brand that would dry out, harden and become a royal mess. My son, used the same doh, and now my nephew gets the…SOMETHING NEW. Yes, he’s the one who got to play with this cool magical molding dough.  My neice was none to excited when I TOLD her that she was going to be the one experimenting (I mean reviewing).

She was smart right from the minute she opened the box and they took the Moon Dough out onto the porch to play. I totally understood, since most of the house is carpeted.

Right out of the box, she noticed that the consistency of the Moon Dough was VERY different than anything they had played with before. It’s soft, fluffy, almost spongy in texture. It doesn’t dry out, so it can be used over and over and over again. Evan proceeded to mix colors together creating a psychedelic barnyard that even Max Yasgur would be proud of (for those of you in the 20-30 age group – feel free to google “Max Yasgur”).

On the other side of the coin, it made a mess, or rather Evan made a mess, getting pieces of it everywhere. As I said before, my niece was smart to take it out to the porch, and simply hosed everything down after they were done playing.

Evan had a LOT of fun, and has played with it again and again, and that’s the point.

can be purchased on Amazon.com or other toy retailers for around $20.

Thank you to Team Mom for providing Cayce & Evan with this toy to review. We were in no way compensated and all opinions are strictly our own.

« Back to School – What about Mom?
Thank you James Patterson »