I was TOTALLY going to write about renewing your spirit today. I had everything ALL planned out (in this head of mine) and was going to grab the laptop, bring it onto the couch and start typing away. That was BEFORE I got sidetracked and delved into my e-mails. I was reading the messages from one of the lists that I subscribe to. It’s a small group, made up of people who have miniature bull-terriers that are all out of the same breeder (Bullmoon). There aren’t a lot of us, as , mini-bullies tend to have very small litters and we’re not talking about backyard breeders here (Bullmoon Bullie’s are at the top in the showring and have also sired some of the Target Dogs, etc). There was a death in the family, one of the bullies from their VERY first litter passed away last week and it got me to thinking. I want to share a bit of my dog & his family with you guys. Yeah, I’m one of THOSE dog owners – who thinks EVERYONE is going to fall in love with my dog. 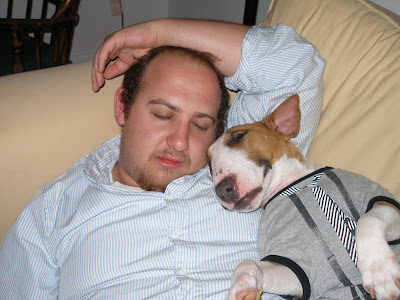 For over twenty years we were an Old English Sheepdog family. Our lives revolved around brushing, picking up balls of hair, having our ankles bitten when walking in a group, etc. At any one time there were usually at least 2 or 3 Sheepies hanging around. But, when we decided to move from RI to FL we thought it was cruel to put a long-haired dog who hated the heat through the Florida summers and placed our last one with a wonderful family.

We were dogless for a while and I really liked it that way. No having to constantly clean hair, no smelly house, no having to go out for a LONG walk in the pouring rain – OH & we could go out for long periods of time without worrying what the dog’s “up to”.

ONE DAY, hubby (yes, I’m blaming it all on him) felt he NEEDED a miniature bull-terrier. NEEDED? Oh & it had to be a breed that was SO hard to find that we’d have to DRIVE from South Florida to just outside of Los Angeles to pick up. That’s 3 days (plus Vegas) in each direction. So, not only do we find a dog that costs a minor fortune, but add another couple thousand on to that just to get him. OY!

But, of course Clem chose us the minute he saw us (if he hadn’t we would have been driving all the way home with NO dog – as there was only ONE for us to possibly adopt), and now I can’t imagine life without him.

We became a part of this Miniature Bull-Terrier family and I now have friends and dog-relatives all over the world. Clem’s sister (same litter) Connie and her “daughter” Syl will be starring in the upcoming “Space Buddies” movie that’s due out in February. So, the Bullmoon folk are all buzzing about our little “star.” Clem’s just headed back into the bedroom to finish his sleeping….so I have just enough time to remind you to hug your pet today before he brings me another toy……