My dear friends and neighbors (they have the mansion next door), set out for their usual weekend at “the club.” Dressed to the nines in typical country club fashion the Kaye’s hopped into the Rolls and headed out to play the back nine. From there they had planned on taking the jet to Anguilla for that last summer weekend before the kids went back to boarding school.

The cell phone rang and Roger (Mr. Kaye) heard the devastating news. The Dow had dropped. This was more than he could handle, so he turned the Rolls around and began to head home.

Still, the Kaye’s wanted to take a vacation and as they pulled in Barbie (Mrs. Kaye) told me the sad, sad news. Luckily, Coleman had sent me some camping gear to review, and I figured that this might be JUST the thing to perk them up.. Of course I had to sell her on the whole “glamping” idea. Luckily, I had a copy of the Robb Report with an article about how chic doing the whole staycation thing was and that “glamping” (luxury camping) was a big hit with the “in crowd.”

She fell for it hook, line and stilletto heels.

I walked over with 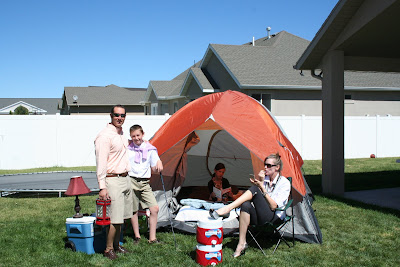 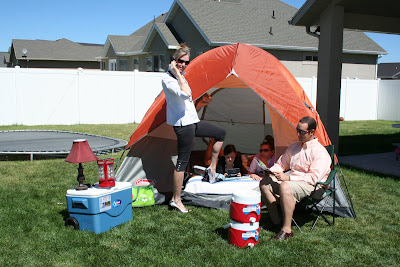 They looked at me with blank faces as I walked into their yard with the camping goodies. The kids had the tent up in less than a minute. I filled the cooler with ice for them and put a wheel of brie in as well as a bottle of Crystale.  The jugs were filled with freshly squeezed lemonade for the kids. I figured that would be a good start to a fun evening.

Roger inflated the air mattress and I had to remind Barbie at LEAST three times not to step on it with her Manolo’s (as you can see, she paid me no heed). The kids immediately piled into the tent and began reading poetry aloud as they lounged on the mattress.

As evening came, the lantern was turned on and they sat around talking about how they were going to move their investments. I could hear the fun outside as I sat on my lanai. At five they served the hors d’oeuvres and champagne, and I noticed a car pull up at around seven with dinner from the area Thai restaurant. 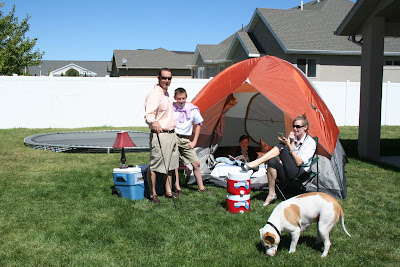 The entire family fit comfortably in their Sundome tent, and except for a visit from the “wild animal” that you see above, they had a FABULOUS staycation. The next day I heard them tell Muffy and Jake at the club all about their “glamping adventure” and I understand that  it’s becoming a fad among the country club set these days.

In all seriousness, now that school has started and there’s little time to get away for a LONG vacation. Something as simple as camping in the yard, even if it includes the luxuries of home is a lot of fun. Not only for the kids, but even the BIG kids like the Kaye’s.

You can purchase Coleman Camping products directly from their website, as well as at sporting good stores and department stores nationwide. The beauty of camping is that for the price of a week’s vacation, you will have gear that will last for many years, providing you with the enjoyment of vacationing over and over again.

Thank you to Coleman for providing some INCREDIBLE camping gear, as well as Ava Rogers and the Klugers for helping out with this post. None of us were compensated and we had LOTS of fun doing this. All opinions (and stories) are our own.