Just the other day I posted about a rebate of $25.00 if you are a new Showtime Subscriber. Of course I signed up and I’ve been seeing a LOT of advertising for the new Steven Spielberg show united states of Tara. From what I can tell the show is going to be about a woman named Tara (Toni Collette) with dissociative identity disorder and how she and her family cope with it. For all of you John Corbett (Sex & the City, Northern Exposure, musician, etc) fans – he plays Tara’s husband!!!! This looks like it’s going to be one of those dark comedies that Showtime and HBO both do very well.

To celebrate the premiere of The united states of Tara, Showtime and Entertainment Weekly are offering a FREE special advanced screening. Screenings are limited to: 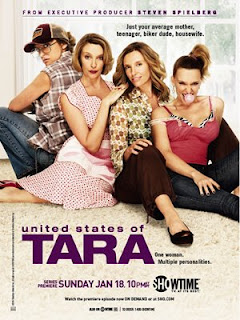