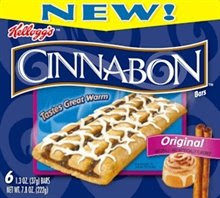 I’ve been known to drive all the way to the Palm Beach International Airport just to go to the Cinnabon store. As wild as that sounds, it’s only one exit from downtown West Palm Beach and I usually make the stop when I’ve planned on going to CityPlace anyway. I just need you to SWEAR that you’ll never, ever tell my doctor. He yells at me about my cholesterol and my weight on EVERY visit and if he knew that I was enjoying all of that sugar and butter….OY, I’d REALLY get an earful.

About a week ago I had received an invitation from MomCentral for the new Kellogg’s Cinnabon Snack Bars Blog Tour. I’m sure when they pulled up the acceptance form, they were scratching their heads, as I don’t think that the e-mail was in my box more than three seconds before I replied – YES!

They arrived a few days ago and I tore the package open (as you probably assumed I would). But they were delivered on a hot, sticky South Florida day and I think the package had been out by the front door a little too long, because the snack bar fell into pieces in my hand. So, I placed the remainder of the box into the fridge, because I needed to give these a FAIR test.

Fast forward to my morning coffee today. I began rummaging through the fridge to see if there was anything good to snack along with the coffee and VOILA, I spied that box of Cinnabon Snack Bars that I had stowed away.

I wanted to try them cold. I can’t tell you why, I think that I wanted them to be firm and my coffee was already good and hot.

Now, I’ve had my share of snack bars and treats – some with cinnamon. These snack bars have SO MUCH yummy cinnamon that they’re perfect for anyone who LOVE this sweet, spicy taste (like me). Add to the thick gooey cinnamon a sugary swirl of frosting and you’ve got yourself the flavor of a Cinnabon with only 150 calories and 4.5 grams of fat.

OK, now you can tell my doctor that I eat Cinnabon’s and at least I have a defense.

There’s one more confession I have to make. Tonight, there was nothing in the house for dessert after our dinner. I popped the Cinnabon Snack Bars into the microwave for 3 seconds and scooped what little vanilla frozen yogurt we had left onto each one and served them up. They were SUCH a HIT!!! The entire family loved them and were asking for seconds.

Now I don’t have to sneak out to the airport to get that great Cinnabon flavor, but I do have to run to the grocery store to get some more.

« A Planet of Color for your kids to Wear
Google Voice is coming! »