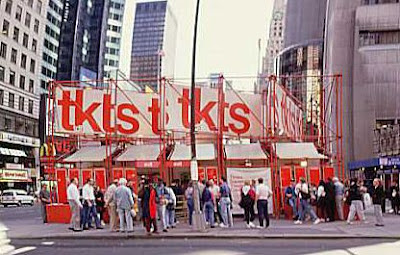 I can’t remember a time when you could catch a show on Broadway (or in your hometown) for these prices. Over the past few years we’ve seen tickets rise into the HUNDREDS of dollars. But, like any other business, times are tough and the theater is no exception.

TKTS Discount Booths offer tickets to Broadway and Off-Broadway musicals and plays at up to 50% off. With dozens of productions on sale every day, there’s something for everyone!

There are 3 locations to buy tickets ~

The TKTS Booths are open ~

If you’re coming from out of town and don’t want to chance not getting the tickets you want.
Broadway Insider has the 411 on some great discounts as well.

There’s nothing like enjoying a Broadway show to really make you feel like you’re living the good life (and at these prices – you’re living it for LESS).