You are here: Home / escape / Brittany with Tony Bourdain – I’m in HEAVEN. 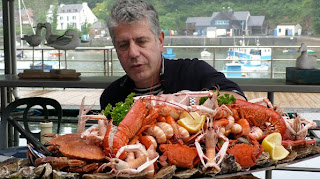 My readers all know that I’m a Francophile, having lived on the outskirts of Paris (in the working class neighborhood of Gentilly) some 30 years ago. I still go back as often as I can and have grown to love not only the city, but Amboise in the Loire Valley as well. I have NEVER been to Brittany and this week Tony will be visiting this picturesque area known for it’s rich history and beautiful ocean. I have a gut feeling that once I watch, that I’ll be hopping on the TGV for a few days of relaxation the next time I find myself in France.

Tony’s trip begins in one of MY favorite places to visit when I’m on vacation – a farmer’s market. Along  with chef  Olivier Roellinger he sprints through and learns about the chef’s tragic story of being beaten, left for dead, and in a coma for weeks, before then having to teach himself how to walk again. Now, over 30 years later, he has made a name for himself as a chef (including being awarded 3 Michelin stars in 2006). Olivier runs Chateau “Richeux”,  a restaurant and hotel that has a Celtic kitchen, exotic herb garden, apple orchards, potato farms, a tee pee, and pigs? That’s right…pigs. Beautiful, clean, nice-smelling pigs (or so Tony says). I have a feeling that there’s going to be some delicious dining on what just might be the “best pork pornever,” and if you KNOW TONY….you know he LOVES his PORK. .

Next up, Tony visits Olivier’s dessert shop (Grain de Vanille) in the quiet village of Cancale. Whatever you do, don’t watch this on an empty stomach. Galettes Cancalese (sand cookies) and caramels au beurre sale (salted butter caramels) were a few of the items featured, and you’ll be booking your trip on Air France faster than you can say Je voudrais un billet s’il vous plaît.

While No Reservations is typically all about the food, there’s nothing like going shopping with the No Reservations crew. Tony’s cameraman insists that the whole crew make a stop to buy the stereotypical blue and white-striped shirt. Can’t picture Tony shopping for one? “What could explain this sudden urge by masses of otherwise reasonable people the compelling need to buy a blue and white-striped nautical shirt?”. You’ll have to watch the episode to see if Tony’s crew can convince him to wear one of these. Hey Tony….I actually have one of these and I LOVE it. It’s CLASSIC (wait, I’m a girl). 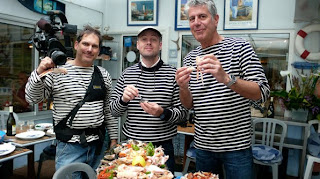 Ok, back to the food. Chances are if you’re an oyster eater, you’ve heard of Belon oysters. It’s also probable that unless you’ve been to Brittany, France you haven’t had a realBelon oyster. Tony heads to the source (the Belon River) to visit Anne Belon, a fifth-generation oyster farmer. Her family was the first to farm oysters in the area. Belon oysters are among the most famous in the world due to the rich nutrients that come from the river itself. Even the dogs eat oysters here.

Tony hits up Ty Billig Creperie for crepes that are supposedly better than those in Paris. (This was said by a Frenchman, so it must be true!). Hmmm….I bet there are a few creperies in Paris that might disagree. Nonetheless, the dessert crepe at this place looks amazing.

Oh and a little bird (ok a PR REP) told me something about a Tower of Shellfish. We’ll have to see about that!

Don’t forget to tune-in Monday, January 18th, at 10 E/P to find out. If you’re looking for MORE information about this weeks episode, check out the  travel guide.

By the way, I’d like to publicly thank Tony for sending me his 2010 No Reservations calendar which he autographed. Now I can COUNT the days until my NEXT trip!

« What are you renting at Redbox this week?
Airwear lenses – don’t you DARE call me four eyes »