You are here: Home / Social / A "Starstruck" interview with Sterling Knight! 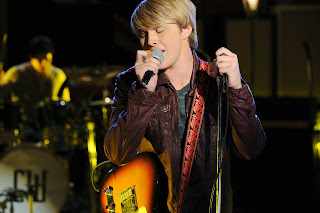 As promised – here’s THE interview with Sterling Knight from Starstruck: Got to Believe.  He’s definitely a cutie and as you can see… a nice guy as well.

CL: Hi Sterling! Tell us all about your new movie…
SK: StarStruck is a fun-filled romantic comedy. The story is about a ridiculously famous pop star who meets a normal girl and they end up on an adventure together. They learn a lot about each other and a lot about themselves along the way.

CL: Are you a fan of romantic comedies?
SK: Absolutely! I’m definitely a romantic comedy dude because I’m a big romantic at heart. I’m a softy, so it’s always nice to watch movies that make you think that love at first sight is actually possible.

CL: What can you tell us about your character in StarStruck?
SK: Christopher Wilde is the most famous and successful pop star on the face of the planet. He has a skewed perception of reality because that’s what his life is like, but he’s a good person underneath it all and he works hard to do his job properly.

CL: Did you enjoy playing Christopher?
SK: Sure. I love cars, so it was really fun to play a guy that has six of them in his garage! I had the time of my life on this movie.

CL: Have you ever met anyone like Christopher Wilde in real life?
SK: Zac Efron is dangerously close to Christopher Wilde. He doesn’t have as many cars as Christopher, but he is hardworking and he is genuinely one of the nicest people I’ve ever met.

CL: Where did you meet Zac?
SK: We shot a movie together called 17 Again and we’ve been friends ever since. He’s very similar to Christopher because he’s really, really famous and he’s extremely inspiring to watch.

CL: Would you like to become a pop star like Christopher?
SK: Not really. I’ve always had fun with music, but I prefer to listen to it rather than sing. It was definitely a fun experience to get into a recording studio and see how everything works, but it’s never been a main goal of mine. I don’t think I’ll be actively seeking a pop career.

CL: So there’s no solo Sterling CD in the works?
SK: Not right now. I’m not going to say yes or no, but there’s nothing going on at the moment. I guess we’ll just have to see what happens because you should never say never.

CL: Are you any good at karaoke?
SK: Karaoke? Gosh! Whenever I get up to sing karaoke, I usually try to do a horrible rendition of the AC/DC song, Back In Black. It’s funny to hear that bad voice come out of me!

CL: Are you a fan of karaoke?
SK: Not really. To be honest, I hate it! Getting up to sing is the most frightening thing in the world to me, but occasionally people will force me into it. I’ll be a good sport about it, but I don’t really like it.

CL: Spill the beans, Sterling… Have you ever been starstruck before?
SK: I don’t usually get starstruck, but I met Sir Paul McCartney randomly on Sunset Boulevard a few years ago and I lost it! I couldn’t breathe, I couldn’t think and I didn’t know how to speak. It was crazy. He was nice enough to talk to my family and me for 10 minutes, but I remember babbling away about nonsense.

CL: Which celebrity would make you starstruck right now?
SK: I think I’d be pretty starstruck over John Mayer. I’m a big fan of his music and I think he’s great. Like I said, I don’t usually lose my cool when I see a celebrity – but I’d be impressed if I got to talk to John Mayer. It would make my day.

CL: Did you have fun shooting StarStruck around Hollywood?
SK: It was really cool to film at some of Hollywood’s most famous landmarks. I’ve been living here for a few years now, so I see the landmarks on a daily basis – but you get desensitized to them when you see them all the time. Then you see them pop up in a movie and you realize they are world-famous. That’s pretty crazy.

CL: What was the highlight to filming in Hollywood?
SK: It was especially cool to film in Hollywood because Danielle – who plays Christopher Wilde’s love interest in StarStruck – had never been to Hollywood before. She’d never seen any of the landmarks and she was really awestruck at the handprints in the concrete at Grauman’s Chinese Theater. It added a great element to the shoot.

CL: Was she blown away by the Hollywood landmarks?
SK: She was! I had so much fun watching her eyes widen when she saw things for the first time. She walked up to the imprint of George Clooney’s shoe to see how big his feet were and things like that. She was really funny.

CL: Did you get recognized when you shot the scenes on the streets of Hollywood?
SK: I got recognized a little bit, but not too much. It was funny because there were times when groups of girls would be screaming my name, but I’d just have to focus and try to remember my lines. It gets a little weird when things like that happen, but it’s all part of the job.

CL:Did you film the Hollywood scenes during the peak tourist season?
SK: We shot at Grauman’s Chinese Theater at five o’clock in the morning, which was horrendous for me. I’m not a morning person at all, but we thought that most sane human beings would be asleep at that time.


CL: Were there many tourists around?
SK: People started to show up and take pictures at around six o’clock. Once people spot a film crew, they start staring – and then a group of younger girls spotted us and started freaking out and screaming. It must have been pretty funny to watch, but it meant that we had to stop shooting whenever the screams got too loud. It’s all the fun of filming in Hollywood really!

BOX-OFF: DISNEY DELIGHTS!
What’s in store for fans on the StarStruck DVD? Sterling has the answers!


Sterling says: “We’ve got some really cool stuff on the StarStruck DVD that I’m really excited about. We’ve got some expanded music sequences that were really fun to shoot and there’s also an entire song that was never heard in the original movie. It’s a really catchy track! If you have as much fun listening to it as I had recording it, you’re in for a HUGE treat. StarStruck is a really cool romantic comedy that will have you laughing your head off. It’s sweet, romantic and a lot of fun to watch. Trust me… You’re going to love it!”

is available for purchase at Amazon.com for $17.99

« We’ve got it! The interview with Danielle Campbell of Starstruck!
NOVICA – one of my little shopping secrets! »