You are here: Home / escape / A Night Out in New York 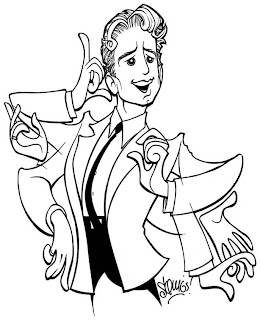 There’s a NEW musical that recently opened on Broadway about an OLD FAVORITE – Danny Kaye. For the under 20 (30 or even 40) crowd – you may not know who Danny Kaye was (although I’m sure that you’ve seen him in White Christmas), but I SO remember watching Danny Kaye movies (although I’m too young to have seen them in the movie theater) with my parents. They were always so much FUN to watch (he was a comedian turned comic actor) and it was the era of musicals and there are SO MANY memorable songs from his shows.
Well, there is now a new musical love story starring Helen Hayes, Brian Childers and Kimberly Faye Greenberg as his wife (and the writer of those wonderful songs). The musical follows the duo from the time the young undisciplined comic Danny Kaminsky meets aspiring songwriter Sylvia Fine at an audition in the 1930s. Under Sylvia’s guidance as mentor, manager and eventually, wife, Kaye rises from improvisational comic to international film star. The musical explores their inspired collaboration and the romance and conflict that made them such a volatile and successful couple. Many of Danny’s hit songs are featured including “Tchaikovsky,” “Anatole of Paris,” “Minnie the Moocher” and “Deena.”

I’d LOVE to see this, especially since right now you can get a special discount price of $39.50 (regular price $56.50) for Times Square Alliance. If you’re going to be in the NYC are and would like to see this musical – just call 212-947-8844 and mention promo code: KAYTSA39 or go to www.broadwayoffers.com and enter the code.

If you’re looking for a great discount meal to have before or after your day at the theater –
The Marriott Marquis (located at Times Square) is offering a special “Mangia Italiano Buffet” for $25 per person at the Encore Restaurant. With choices such as

You won’t go hungry. PLUS, for $5 you can add a glass of red or white house wine (buffet patrons ONLY).