You are here: Home / escape / 7 Hotels where animals roam right outside your window 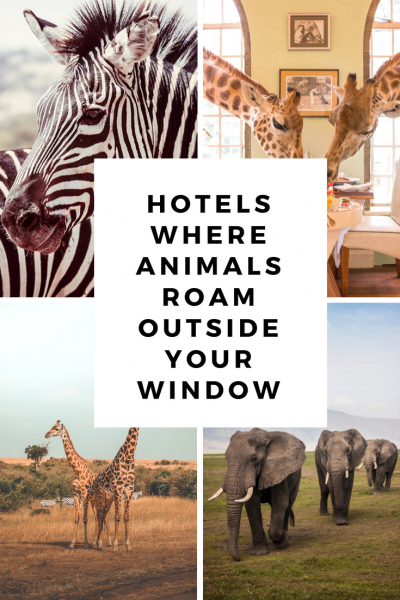 Dreaming of an adventurous but altogether relaxing and luxurious respite? We’ve got you! We’ve put together a list of dreamy hotels where you’ll be enfolded by nature with the added bonus that spotting wild animals roaming right outside your window is guaranteed.

Set amidst some of the world’s most alluring natural locations, be it the rugged tundra of Finland, the lush rainforests of Costa Rica, or the endless savanna plains in Africa, these hotels are the perfect blend of luxury and wilderness.

Nairobi, Kenya
Run by The Safari Collection, this unique boutique hotel was originally built in the 1930’s as a Scottish hunting lodge and is now considered a timeless icon of Kenya’s capital city.

With an extraordinary Victorian façade and an interior that will take you back to Karen Blixen’s “Out of Africa”, this stunning hotel is a go-to place for the sanctuary’s giraffes to come and poke their necks into the building’s windows in hope for some treats.

Chobe, Botswana
Set next to the beguiling Savute Channel, this lodge is the ultimate glamping experience in Africa.

With elephants going about their day right outside your balcony, a pool overlooking the channel, and dinners hosted under the Milky Way with native rhythms playing in the background, this lodge will entice your senses with African allure.

Serengeti, Tanzania
Located deep inside the renowned Serengeti National Park, the Four Seasons has become a trademark of the ultimate luxury safari experience. You’ll be able to gaze at wild elephants drinking from the watering hole right from the comfort of their pristine infinity pool.

This lodge boasts an incredible interactive center, where guests can learn about the Serengeti and as interact with the local Maasai culture.

Whether relaxing at the pool observing wildlife after a day of game driving in one of Africa’s most famed national parks, savoring scrumptious food at their varied choice of restaurants, or enjoying mojitos with a view, this luxury lodge is the ultimate wilderness retreat.

Maasai Mara, Kenya
Who ever knew that the words wild and luxury could both be used to describe the same place?

Located right in the heart of Maasai Mara National Park, this tented camp lodge is the epitome of a 5-star safari experience. With wild animals roaming right outside their backyard, don’t be surprised if a herd of wild giraffes happens to pop in during a relax session at the infinity pool.

Alta, Norway
With the Finnmark Plateau’s pristine nature sitting right at your doorstep, it’s difficult not to fall in love with this tipi-style lodge in the middle of northern Norway’s wilderness.

During your stay here, you’ll get to sleep under a million stars, gaze at the bewildering Northern Lights, dog sled through snow-capped terrain, and pet the in-house huskies.

Sloths, monkeys, toucans, and macaws are often visible on the grounds and they don’t mind paying a visit to guests’ balconies.

Orlando, Florida
This safari-inspired hotel is set in a 43-acre natural reserve where giraffes and zebras reside in. Located inside Walt Disney World’s premises, staying at this replica of a luxury African lodge will make you feel as though you’re somewhere in the middle of the actual African bush.

Keeping in line with its safari theme, the restaurant serves unique flavors from all over the African continent.