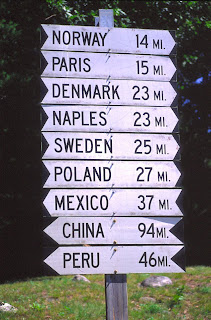 Some people salivate when they hear the phrase “luxury travel.” But what is luxury? Prices ramped up to exclude the proletariat aren’t desirable to me. Even with a lottery win, I wouldn’t want to ski at Gstaad, play roulette at Monte Carlo, or blow $400 in a Michelin-starred restaurant.

I get my share of travel-writer freebies, but I’m happy to be a prole. Quite frankly, I’d rather overnight in a viper pit than in some ludicrously priced boutique hotels. Especially the ones designed for needy, pretentious types preoccupied with status. Do sane people believe the thread count of their bedsheets is important?

My luxury is exploring extraordinary places. Fabled cities. Islands that belong on “here be dragons” maps. Places like the following – four of my favorite destinations, plus another five I yearn to visit. Their affordability may surprise you. The tenth spot on my list? Although destined to be among this year’s media darlings, it’s one of my old haunts. Prepare for serious culture shock.

Zacatecas is a gorgeous piece of 17th-century colonial Mexico. Founded on silver hewn from the Eden Mine, this stepped-street city was once a prized jewel in Spain’s crown. The conquistadors created a baroque masterpiece of fountains, belltowers, and mansions that wouldn’t be out of place in Andalucia. Near the Cathedral, museums, and markets, 19th-century Posada Tolosa has doubles for $60. (hotelposadatolosa.com)

Transylvania offers more than Dracula nonsense. Brasov is a picture-book of stout towers, cellar taverns, and medieval merchants’ houses. It makes a good traveler’s base in this land of bear-trampled forests and quaint villages whose farmers use horse-drawn carts. If you must pay homage, Bran Castle is touted as Dracula’s Castle, and is only a 40-minute drive away. Sighisoara, birthplace of Vlad the Impaler, is a far better day-trip. I rented a Brasov apartment for $58 nightly through best-accommodation.ro.

My choice of Syria may raise eyebrows. But being history mad, I want to explore Damascus, reputedly the world’s oldest continuously inhabited city. Plus take the old Silk Road to see Palmyra ’s vast Roman ruins of pink sandstone, the Crusader castle of Krak des Chevaliers, and delve into Aleppo ’s treasure-filled souks. Straight from an Arabian fairytale, Beit Wakil is a 400-year-old Aleppo merchant’s house transformed into a hotel. Doubles are around $90. (beitwakil.com)

Basking in the Indian Ocean off Tanzania, Zanzibar conjures up thoughts of dhow boats, flying fish, and pepper plantations. Once busy with spice merchants and slave-traders, Stone Town is the island capital. Picture fortress ruins, sultans’ palaces, and miles of palm-fringed coves. Ocean coral gardens attract divers and snorkelers. July’s Festival of the Dhow Countries is East Africa ’s largest cultural event. On a private beach and with promising beds strewn with jasmine, Mtoni Marine Hotel has doubles for $90. (mtoni.com)

The land of the ancient Hittites, Turkey ’s Cappadocia region is a magical realm of caves, volcanic valleys, and peculiar rock formations called “fairy chimneys.” Early Christians used its many caves as churches and monasteries. (You can still see the frescoes.) Complete underground cities include Kaymakli, with seven subterranean levels linked by a labyrinth of tunnels. In Akkoy, the Village House Cave Hotel looks to be an offbeat treat. Doubles, including breakfast, $90. (villagehousetr.com)

I’m drawn by the colonial charms of Antigua, Lake Atitlan, and markets promising sensory overload. Home of the Maya, Guatemala is renowned for colorful textiles and weaving villages. I don’t generally watch shooting stars from a hot tub, but thatched-roof Villa Sumaya on Lake Atitlan ’s shore seems a heavenly spot to do it. Doubles for $65. (villasumaya.com)

Get some serious street cred. Liverpool is no glamour destination – I once lived there for three months – but it is Europe ’s 2008 Capital of Culture. (See liverpool08.com.) Birthplace of the Beatles, soccer fanatics, and working-class heroes, this gritty port on the Mersey will celebrate with a year-long packed program of festivals, street art, and carnivals. July brings a maritime spectacular with the start of the Tall Ships Race. liverpoolguesthouses.com has B&B doubles from $88.

[Ed. Note: Steenie Harvey gets paid to visit white-sand Caribbean beaches… wildlife sanctuaries in Borneo… Indian Ocean hideaways… Rome… Paris… and beyond. To find out how you can do the same, join The Right Way to Travel FREE e-letter.

This article appears courtesy of Early To Rise, a free newsletter dedicated to making money, improving health and secrets to success. For a complimentary subscription, visit http://www.earlytorise.com.